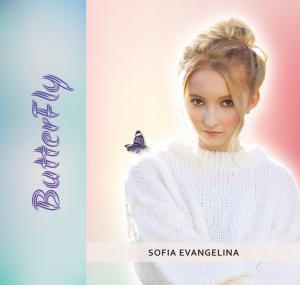 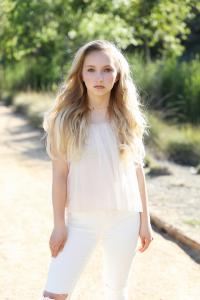 Sofia Evangelina a budding Canadian pop singer/songwriter brings a collection of iconic songs to her debut album ‘Butterfly’ being released on August 24th, 2018

At such a young age Sofia has an incredible voice with a matching persona to perform and such determination I haven't seen in anyone since I worked with Michael Buble”
— Bryant Olender, Producer

VANCOUVER, BC, CANADA, August 21, 2018 /EINPresswire.com/ — Sofia Evangelina exceeds all expectations of a young artist with an abundance of confidence, astonishing natural talent and a ‘powerhouse’ voice. At fifteen, Sofia is releasing her debut album entitled ‘Butterfly’ on August 24thon all platforms: iTunes, Apple Music, Spotify, Amazon, Google Play, and more!

Sofia Evangelina is a rising young Canadian teen pop singer who is bringing a collection of iconic songs, which is a perfect blend of historical resonance and pop modernity, to her debut album ‘Butterfly'. Bryant Olender who has worked with Michael Bublé produced the aspiring pop princess magical debut album. Interweaving elements of R&B, soul, gospel, and pop, her forthcoming releases are a collection of covers and originals showcasing her vocal ranges and newly found passion for songwriting.

The debut album compiles some of Sofia’s favorite covers that showcase her evolving voice, handling different vocal and musical styles in a completely unconventional way. ‘Butterfly’ is the first extension of her soul, to be shared with the world. She has drawn songs from some of her favorite artists: Beyoncé, Etta James, and Nina Simone. These powerhouse voices have changed Sofia’s perception of how her voice will forever evolve. Sofia was also inspired by some soulful old hits from Lionel Richie, Bill Withers and Stevie Wonder, Moody Singing and the youthful bops of Jackson 5 by adding her touch of sparkle and modernity.

From the very early days, Sofia was a natural born performer full of boundless energy. Putting on her mom’s mascara and lipstick and cutting her scarves to create her own funky “designs”, she would spend hours performing in front of a mirror and later, entertaining random audiences. “I have fallen for music since day one,” Sofia explained. “I can just remember hearing and seeing music everywhere as if it followed me. No matter where I went, I felt the rhythm and a beat. I told my mother “it paralyzed me” – for the silly lack of better words at age five!”

Growing up in Calgary, Sofia attended an art-centered school. She won an award entitled ‘the closest to the core of arts’ and enthralled the audience into repeat standing ovations. She won several National talent competitions including Canada’s “National Overall Talent Awards” at Talent INC 2014, Canada TeenFest, The Mics and many others. She has also appeared at various festivals throughout North America.

Many of her fans don’t know that this talented singer-songwriter is an accomplished freestyle skier who has been the youngest to compete at the World Cup circuit in her discipline. It was freestyle skiing that led her to travel the world and observe cultures and people. This experience formed her perspective on youth and global problems and has opened her eyes to identify the trends, narratives of society, and finding raw emotions.

Sofia has a first-hand, deep understanding of the issues and the trends pertaining to youth culture. Through her music, Sofia hopes to inspire her fellow peers and encourage them to embrace their individuality, develop self-esteem, stand up for what is right and embrace their inner beauty. Working painstakingly on her vocals and mastering her craft with prominent Canadian songwriters, Sofia is on an upward trajectory to becoming the voice of her generation.

Sofia translates all of her powerful experiences she lived through and her overflowing passion into her song's lyrics. Her skiing and striving to achieve personal-best attitude, together with traveling the world – has helped to shape her vision and character and had led her to evolve into someone who with her music – now, can help to empower the world.

‘Butterfly’ is being released on August 24thon all platforms and more information can be found on her website www.sofiaevangelina.com

Sofia Evangelina is available for interviews, appearance, and photos upon request.

What are they saying about Sofia Evangelina?

"Sofia is a powerhouse of talent, energy, and excitement! We have had the pleasure of working with her in her development over the past several years and we can tell you that she delights every single person he meets. She is more than a singer, actor or dancer she is an allover, all-out, full-out, non- stop performer who never disappoints" ~John Stevens and Doug Sloan | Owners, Talent INC Canada

“A powerful and commanding voice for someone so young.  With her passion, determination and positive attitude, superstardom is imminent.” ~ Beverly Delich-Silver Lining Management, Vancouver, BC

I Want You Back Cover