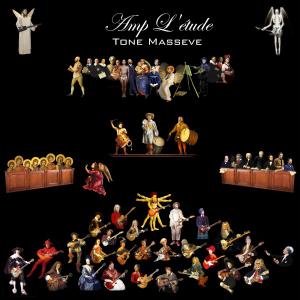 “Playing with Tone was one of the most illuminating musical experiences of my career. Yes, he's that good.” – Graham Parker

NEW YORK, NY, USA, September 13, 2018 /EINPresswire.com/ — The singing sustain of multiple razor edged electric guitars, the monster rock backbeat of Jethro Tull drummer Doane Perry and The Moonlight Sonata? Yes, This mash-up is the concept behind Tone Masseve's album “Amp L'étude.” Classical pieces? Yes, but these are not the dry, conventional versions we've all heard before. The album vividly brings these compositions to life with a new and powerful sound.

Tone said, “In my childhood I was exposed to many different musical styles and genres. Although I am really a blues player, I also love the music of Bach, Beethoven, Tchaikovsky, Schubert, Chopin and Debussy. I wanted to play their classical pieces with a rock sound and attitude.” He used the feedback, bends, shakes, falls and dives of his guitar heroes; Jeff Beck, Jimi Hendrix, early Eric Clapton, Robert Fripp, Brian May, Joe Satriani and George Harrison to do just that.

Tone's dynamic playing combined with Doane's great rock feel, give this music of the masters an entirely new presentation. Some of the sound and production techniques of this record are drawn from famous rock tracks such as; “Whiter Shade of Pale,” “The Hill of the Skull,” “God Save the Queen,” “Wind on Water,” “She's so Heavy” & “Girl,” and, “1983… (A Merman I Should Turn to Be).”

Every now and then a brilliant and fully developed artist arrives on the scene. Such is the case of Tone Masseve's enigmatic emergence out of the shadows. His sonic identity, unique voice and concept and his blending of seemingly disparate styles simply amazed and surprised me. Tone's inspired and highly original take on some of the most hallowed and iconic classical music ever composed is eloquently orchestrated, passionately and precisely executed and a wholly satisfying aural experience! I believe any of the great composers represented would be honored and thrilled to hear their music so creatively reimagined and lovingly brought to life within such a modern and innovative context.

One of the most powerful elements in his music is the thick, sonorous and clear voice which he elicits from his “Guitorchestra”. Speaking as one who participated in this exciting project, I found the rich harmonic blend and counterpoint combined with the strength and subtlety of his parts, compelling and utterly inspiring to play off of … and was astonished to think so much of this was coming through the head, hands and heart of a single musician. And I never even met him. I don't know how he did it but that is one of the delightful musical riddles which does not need solving.

Joyful, biting, menacing, muscular, melancholy and euphoric are apt descriptions which are summoned to mind when I listen to his music. All of those elements provided a powerful catalyst for my own contributions. I am honored to have worked with this gifted artist and to have been a part of such an original musical adventure … and I would like to think the mysterious and hugely talented Tone Masseve will not remain unknown for much longer.

Tone started playing the guitar at age 6 and performing live at age 15. By the time he was 18 he was doing session work in NYC. Legendary Graham Parker saw him playing with a band called Robazz Bowtime, and asked him to play a few gigs. Graham said, “I didn't play with Tone for a great deal of time, but it was one of the most illuminating musical experiences of my career. Yes, he's that good.”

The recording started in 1995 and took more than 20 years to complete. The guitar parts alone took more than two years to record. In 1997, while still working on Amp L'étude, tragically, Tone got pneumonia and died.

In 2016 a wonderful and talented group of musicians came together to finish his long lost album. The first was Doane Perry who added his hard hitting rock drumming to six tracks. Doane was the drummer for the legendary, Grammy winning rock band, Jethro Tull, for twenty-seven years. He also played with Lou Reed, Todd Rundgren and many, many others.

Next was Garry Kvistad who is a Grammy award winning master percussionist. He is a member of the four man percussion group Nexus. The New York Times called Nexus “the high priests of the percussion world.” Steve Reich said, “They are probably the most acclaimed percussion group on earth.” Garry added orchestral percussion; tympani, large gong, orchestral bass drum, glockenspiel, orchestral chimes, and symphonic crash cymbals to two of the pieces

Then members of the vocal group Prana added their voices to a couple of tracks. They gave one piece, “Maria, (She's so) Ave” a decidedly Liverpudlian sound. Finally Maria Todaro was brought in to conduct the choir for “O Fortuna.” Maria is not only an internationally renowned opera singer, stage director, and conductor, but also the general director of The International Festival of the Voice. For this recording, with her deep understanding of the voice as an expressive instrument, she evoked an impassioned performance from the choir.

On YouTube there are twelve 30 second sample videos, one for each of the twelve pieces from “Amp L'étude. “The videos feature the characters from the front cover of the album: https://www.youtube.com/playlist?list=PL2Wu-VN7bmX2249K3hIJy8HgFZTfJC208

In closing Tone had this to impart, “Music has no boundaries. If you play it with all of your heart it doesn’t matter what style it is, the feeling will come through.”