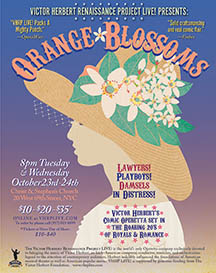 Come, glimpse the beginning of the Roaring Twenties, Victor Herbert style! While the divorce business keeps Lawyer Brassac’s coffers quite full, he finds himself considered the White Knight to far too many female clients in need of rescuing including his 21-year-old godchild who shows up in Paris in financial trouble. That same morning, “the Playboy,” gambling buddy, Baron Roger Belmont arrives with a most unusual legal problem. Through it all runs wonderful Herbert melodies including, “A Kiss in The Dark,” “Way Out West in Jersey,” “Then Comes the Dawning,” “This Time It’s Love,” and “A Dream of Orange Blossoms.”

Featured in the brilliant score of Orange Blossoms is one of the many opera gems Victor Herbert launched into popular culture, “A Kiss in The Dark.” This song is a very modern examination of the power of a simple kiss to send someone swooning into the heights of true love, and has been recorded by Beverly Sills, Eileen Farrell, and others.

This score is filled with surprises and modern touches including neither an Overture nor a Grand Finale. The songs of Orange Blossoms are woven together with a well-written book by Fred (Frederique) DeGresac, a rare female librettist, who also collaborated with Herbert on The Red Mill (1910), The Enchantress (1911) and VHRP LIVE’s upcoming April 2019 performance of Sweethearts (1913).

“While the libretto for Orange Blossoms has been respectfully tailored down to two acts due to a time constraint for the company, there is no updating of its content into the modern world,” says Alyce Mott, Artistic Director of VHRP LIVE! “Orange Blossoms stands proudly at the very beginning of those ‘roaring twenties,’” she continues, “and proves Herbert to still be the finest theatrical composer of that time, until Kern's Show Boat burst on the scene.”

In addition to his musical endeavors, Herbert was instrumental in the formation of the American Society of Composers, Authors and Publishers (ASCAP), and he fought recording companies who tried to use popular and classical music without paying royalties.

ADVANCE TICKETS ON SALE ONLINE:
Specially priced tickets for Orange Blossoms are $10-$35 available online at www.VHRPLIVE.org or at tdf.org up until noon on performance days.

DAY-OF TICKETS ON SALE AT THE DOOR:
Full price $25-$40 tickets for Orange Blossoms are available at the door at 7:30pm on the dates of the performance. To purchase by phone and for more information call (917) 815-8899. (PLEASE do not call the church.)

The Victor Herbert Renaissance Project LIVE! is the world's only company exclusively devoted to Victor Herbert, the Irish-born conductor and musician who composed innovative scores for early Broadway, as well as classical and popular music. Herbert contributed powerfully to the emergence of an authentically 20th century American sound; and did so lavishly, producing 43 operettas, 2 operas, and innumerable compositions for orchestra, band, cello, violin and piano.