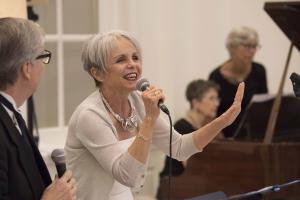 Joanie really is a class act. She has quite a special voice.”
— Jack Candido, Clearwater resident

CLEARWATER, FL, US, April 11, 2019 /EINPresswire.com/ — On Saturday April 27th, the Scientology Information Center will host a solo concert with the dynamic Ms. Joanie Sigal to usher in Spring.

Ms. Sigal will perform a mix of songs including Broadway, jazz, pop and more. Sigal will add her own special touch by narrating each song, adding depth and beauty to these classics. Light refreshments will be provided for event attendees at 6:30pm and the show starts promptly at 7pm. There is no cost to attend

Joanie has been performing since a very young age. Her mother is a trained musician who played the organ, sang in choirs, directed the choir or some combination thereof at every military base she lived on – her father being a career Air Force man.

When her father retired in Hawaii, bringing her whole family to the island, Joanie rekindled her love of acting and singing and immersed herself in theater during her college years. She was a featured performer with the Hawaii Performing Arts Company, the Honolulu Theatre for Youth and the University of Hawaii productions. She was also a featured player in the stage show "Paradise Found" which she performed in Honolulu for 2 years in the 70s.

“Joanie has been performing in the Tampa Bay area for 22 years,’” said Amber Skjelset – Manager of the Scientology Information Center and event organizer. “Her first show was right here at the Historic Clearwater Building with her then-singing partner, Tom Godfrey which launched her successful part-time music career. It’s quite a treat to have her perform here again where it all started.”

Concert goers sharing their experience have said, “Joanie really is a class act. She has quite a special voice,” said Jack Candido, a Clearwater resident originally from Boston. Another guest remarked, “I am so glad we came. The way she sang touched me so much. She took us to a lovely place. I liked Joanie’s spirit, the environment and the atmosphere was great!”

The Scientology Information Center, located in the century-old Clearwater Building in downtown Clearwater, opened on July 11, 2015, and currently houses a gallery of audiovisual displays with some 400 videos. The Center is open to all and provides a self-guided tour showing basic Scientology beliefs, Churches around the world, ongoing social programs and the life of L. Ron Hubbard, Scientology’s founder. The Center offers tours to the broad public and civic leaders; holds concerts, theatrical performances and receptions for the community; and opens up the use of its conference room to social, civic and non-profit groups.

To reserve seats or to learn more about the event, please contact Amber Skjelset, Manager of the Scientology Information Center at 727-467-6966 or amber@cos.flag.org.

The 100 year-old historic Clearwater Building was purchased by the Church of Scientology in 1975. Built in 1918, the property originally served as the Bank of Clearwater. In 2015, it was re-opened to the public as the Scientology Information Center where the community can learn about Scientology and its beliefs or attend community events.