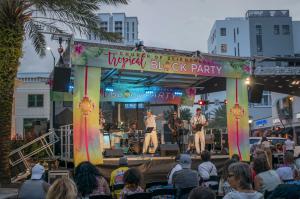 The Flag Band provided entertainment at the Church of Scientology Flag Service Organization’s Summer Block Party. More than 1,500 children and families came to the event on the 500 block of Cleveland Street to enjoy the family-friendly event.

We plan out summer vacation to attend your event and I have never seen anything like it anywhere. We can just come here and families don’t have to worry about anything, just enjoy themselves.”
— Father from Pennsylvania

CLEARWATER, FL, US, July 18, 2019 /EINPresswire.com/ — On Saturday the 13th of July, more than 1,500 fun-seeking children and families came together in downtown Clearwater to celebrate this community at the Summer Block Party, sponsored by the Church of Scientology Flag Service Organization.

This free event included pony rides, a petting zoo, a bouncy house and carnival games. The Flag Band provided live entertainment throughout the evening. Area non-profits, covering such areas as the arts, anti-human trafficking and animal rescue and rehabilitation provided information about their programs alongside food trucks and a popcorn/cotton candy stand.

Guests could also learn more about Church of Scientology-sponsored humanitarian programs through a ‘passport’ that took them through each of the centers, located along North Fort Harrison Ave. These programs include United For Human Rights, the Way to Happiness, the Truth About Drugs, Criminon, Volunteer Ministers and the Citizens Commission on Human Rights. Rounding out the centers, the Clearwater Community Volunteers Center provided a space for families to cool down in.

“We have been attending your Block Party every year,” said one father from Pennsylvania. “We plan out summer vacation to attend your event and I have never seen anything like it anywhere. We can just come here and families don’t have to worry about anything, just enjoy themselves.”

Local merchants joined in, donating gift cards and baskets for the prize drawing that was held at the end of the evening.

To learn more about future community events sponsored by the Church of Scientology Flag Service Organization, please contact Amber Skjelset at 727-467-6966 or at amber@cos.flag.org. More information about Scientology can be learned at www.scientology.org or www.scientology.tv.

About the Church of Scientology: (from the media site)

The Scientology religion was founded by author and philosopher L. Ron Hubbard. The first Church of Scientology was formed in Los Angeles in 1954 and the religion has expanded to more than 11,000 Churches, Missions and affiliated groups, with millions of members in 167 countries. Scientologists have been active in community service in Clearwater for more than four decades. But the impact of these activities was tremendously accelerated in 2015 with the opening of the Scientology Information Center and six humanitarian and social betterment facilities in downtown Clearwater.