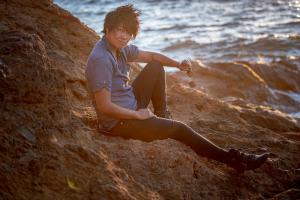 OSAKA, JAPAN, July 18, 2019 /EINPresswire.com/ — DJ Carmin Wong is a rising star, known for her unique mix of progressive house and trance. Currently prepping her first album release ‘Cooling,’ she rocks the house every Thursday night in Sakai, Fukui, Japan serving as house DJ at the exclusive Bee, The Public Space. When people watch and listen to the music emanating from the sexy turntablist behind the decks, they immediately discover “You can’t go wrong with DJ Wong!”

Staying busy with DJ performances, and penning more dates into her heavily booked schedule, Wong says, “DJing allows me to share music with the masses.” Noting her audiences, she says, “In a melting pot like Tokyo, Osaka, Japan, you are going to have everybody. You are going to play a room with people in it from every ethnic group. You can’t just play one specific genre of progressive house and trance. You have to create a style for who you are. For me, I am really into international. I play music that everyone can relate to, enjoy, dance to, move to and groove to.”

Wong, who has also worked behind the turntables for Universal Studios, says she enjoys performing at a diverse range of events.

In September 2018, DJ Carmin Wong DJ’d in front of 500,000 thousand people and also served as emcee at the famed Cherry Blossom Festival in the Little Tokyo section of San Francisco.

In June 2012, DJ Carmin Wong DJ’d in front of 5 million people and also served as emcee at the famed LGBT Pride Festival at Civic Center, in the heart of San Francisco.

In October 2016, DJ Carmin Wong DJ’d at the Glass House in New York City in support for the National Hotline for Domestic Abuse that has served over 4 million calls since the organization began until this day, and many more answered in the future for those who have been battered and abused.

Wong lives in Los Angeles, in its world-famous Chinatown. She explains, “The people in Chinatown are very traditional, which makes it hard for me as a Chinese American, who is not only a female DJ in a male dominant scene, but also because I am a lesbian.”

She adds, “It is ironic to me that other cultures are more accepting of me.”

Born in 7 Mile, Detroit, Michigan, DJ Carmin Wong moved to Los Angeles as a young teen, and became obsessed with the trance scene when she began attending underground parties. She eventually began hanging out with producers whenever she could to learn the tricks of the trade. “I have every music software you can get,” she notes. “I know how to use all of them and how they work. Ableton, Omishpehere, Sonic, FL Studio. The list goes on. I have every single synthesizer every DJ and producer in this town uses in this new age of music. I have spent so much money on software, it’s ridiculous. I can literally compose anything I want. I am always hearing tunes in my head.”
Adds Wong, “I always hear music. Even in my sleep, my dreams.” She is currently producing another album soon to be released.

DJ Carmin Wong points out, “My first name has an ‘I’ in it. My middle name I was given is simply L, the letter ‘L.’ It can mean many things. She is lovely, she’s loud, she’s a lesbian.”

DJ Carmin Wong performed this year at the Orange County Pride, which also feature DJ Dave Aude, who has been received a Grammy, and title of ‘Best Remixer’.

“Music motivated me to be a bigger person,” says Wong, who has chanted in front of the eight foot Buddha inside her parents’ restaurant. “I chant mantras and I believe in karma,” she states. “Whenever I’m stressed out, I go over to tojinbo cliffs
overlooking the ocean.” She says, “My music is going to give you a mantra feeling, like when you chant.”
“I hope to inspire people,” she says. “I want people to relate to my music in every respect.”

Her debut album will be released in 2019, as her first single entitled “windchime’s” is out! In the meantime, her fans are enraptured just to have a chance to hear her on stage behind the decks, she is currently in Osaka, Co-Producing an event called Un-XXXX for Devcon 5, and BlockFestJP, October 7-12th, 2019, for more info.