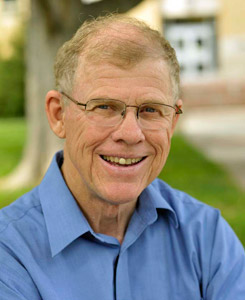 The Boulder Concert Band is proud that such a distinguished conductor as Ken Singleton has chosen to be our director. We look forward to a long and musically engaging tenure under his direction.”
— Bernard Buster, president, BoulderConcert Band Board of Directors

Recently retired as Director of Bands at the University of Northern Colorado (UNC), Singleton’s responsibilities included conducting the Wind Ensemble and Concert Band, and administering all aspects of the band program. He also served as chair of the Graduate Wind Conducting program.

An avid transcriber of brass music (over 1,000 titles) and a music editor for the Charles Ives Society, Singleton has more than 100 publications to his credit, mainly works for band and wind ensemble. His editions of music by American composer Charles Ives have been recorded by the Chicago Symphony, the St. Louis Symphony, the Concertgebow Orchestra, the Cleveland Orchestra, and numerous other ensembles. Since stepping down as conductor of the Denver Brass, the region's premiere brass ensemble, Singleton was welcomed back this year to conduct their Memorial Day concert.

As a guest clinician and conductor, Singleton has conducted All-State Bands in New York, New Mexico, Tennessee, North Dakota and Colorado. He has been named UNC’s College of Performing and Visual Arts Scholar of the Year, and has received the Kappa Kappa Psi Distinguished Service to Music Award. Singleton is a member of the Colorado Bandmasters Association Hall of Fame, and a member of the American Bandmasters Association, a prestigious organization that represents American bands to the world.

“The Boulder Concert Band is proud that such a distinguished conductor as Ken Singleton has chosen to be our director,” commented Bernard Buster, president, Boulder Concert Band Board of Directors. “We look forward to a long and musically engaging tenure under his direction.”

In his spare time, Singleton has hiked and/or backpacked the 500-mile Colorado Trail three times, and is less than 50 miles shy of completing it a fourth time.

Under the direction of Dr. Singleton, now is the perfect time to join the Boulder Concert Band’s audience family. All concerts will take place at 7 p.m. at the First Congregational Church, 1128 Pine Street, Boulder.

About the Boulder Concert Band

Celebrating its 43rd season, the Boulder Concert Band has a glorious history. The first records of a performing band in the city of Boulder date back to 1870. The ICC Silver Cornet Band, as it was known, performed weekly concerts in the pioneer town of Boulder. In the spring of 1897 a larger band organization was formed. This group, called the Boulder Band, was said to be the best organization of its type in Colorado. Several decades later, the Boulder Municipal Band was formed and was the first to include women musicians.

The Boulder Concert Band as we know it today was reorganized in 1976 by the late Hugh McMillen, former Director of Bands at the University of Colorado. Considered to be one of the premier adult community bands in the state, the current organization has more than 60 volunteer musicians. Its members are drawn from the business, professional, and educational communities in the Boulder County and Denver metro area.