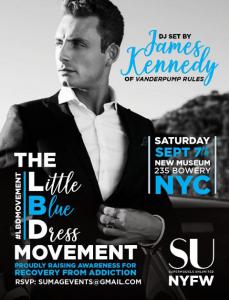 Addiction effects everyone at some point in their life, whether it be a friend, family, or yourself. Shatterproof is working hard to aid in their recovery, save lives, and rebuild relationships.”
— says Jordan Kimball

NEW YORK, NY, UNITED STATES, August 29, 2019 /EINPresswire.com/ — Over the last two years, survivors, celebrities, and families affected by the opioid crisis have come forward to share their stories. As decades of medical neglect come to light, large pharmaceutical companies and government bodies are finally taking notice. The fashion industry is no stranger to addiction and in the true spirit of New York Fashion Week, Supermodels Unlimited Magazine will honor those lost to the disease of addiction and celebrate those living in recovery by showcasing a collection of little blue dresses on September 7, 2019. The LBD Movement is a celebrity fashion showcase held seasonally during New York Fashion Week that highlights national issues facing teens and young adults.

This year’s show will feature survivors of addiction, from all walks of life, who are giving back to their communities and inspiring a new generation to make healthy choices. Along with the survivors walking in The LBD Movement runway show are celebrated models and actresses: Isis King from Netflix’s Now They See Us, Jeana Turner from America’s Next Top Model (ANTM). Spinning beats for the models is celebrity DJ James Kennedy from Bravo-TV’s Vanderpump Rules.

The evening’s celebrity host will be Jordan Kimball of ABC-TV’s Bachelor in Paradise. Kimball is currently starring in the newest season of Bachelor in Paradise, where things are quickly heating up. Kimball is also a fan favorite from The Bachelorette. Kimball will be joined by current cast members walking in the show to support the cause. “What they’re doing cannot be applauded enough. Addiction effects everyone at some point in their life, whether it be a friend, family, or yourself. Shatterproof is working hard to aid in their recovery, save lives, and rebuild relationships. Shatterproof is a blessing, and we owe it to them to show our support!” says Jordan Kimball.

Supermodels Unlimited Magazine will conclude The LBD Movement runway event with a live music tribute by Wesley Stromberg from The X Factor, followed by a financial commitment to Shatterproof. Shatterproof is a national nonprofit organization focused on reversing the course of the addiction crisis in America by advocating for changes to federal and state policy, transforming addiction treatment, ending stigma and providing public education through family and workplace programs.

“One in three Americans is impacted by addiction, and with stigma as the leading killer in our country, our young people especially need to feel supported in openly discussing this disease and seeking treatment,” said Gary Mendell, Founder and CEO of Shatterproof. “It is imperative that industries do their part to lead the conversation around this public health crisis, and we are grateful to Supermodels Unlimited Magazine and the fashion industry for using their platform to do so.”

The event will feature a Bubbles with Benefits bar, sponsored by Vita Coco from 8-9PM, giving both guests and media the opportunity to spend time with the event participants, media, and the charity to speak about the important work being done to help those in need.

About Supermodels Unlimited Magazine:
Supermodels Unlimited Magazine is a leading publication on the women’s market that is dedicated to inspiring and empowering females. Now in its 19th year of publication, SU has taken over the modeling industry as a vital resource for both aspiring and established models and industry professionals. In the spirit of philanthropy, SU works closely with numerous celebrities and causes to promote inclusion.

About Shatterproof:
Shatterproof is a national nonprofit organization dedicated to reversing the course of the addiction crisis in America and ending the devastation addiction causes families. Shatterproof is transforming addiction treatment, shattering stigma, advocating for federal and state policy change and payer reform, and supporting and educating the community.