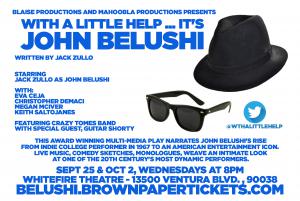 Previews of With a Little Help It’s John Belushi! 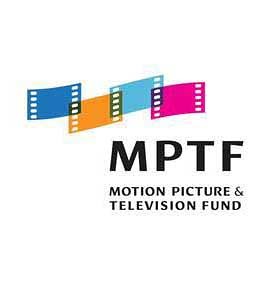 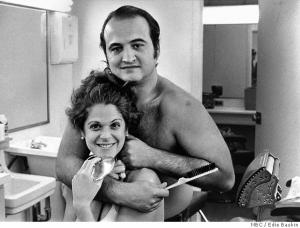 Portion of proceeds of With a Little Help…It’s John Belushi! benefits cancer charity in Gilda Radner’s name and memory.

I really liked what you did. You really captured the spirit of the time. I was there for that…I loved how aggressive you made John on stage.”
— Jim Belushi

“WITH A LITTLE HELP…IT’S JOHN BELUSHI!”
Written By and Starring Jack Zullo.

Ricocheting from its enormously successful run at the 2016 Hollywood Fringe, “With a Little Help…It’s John Belushi!” bounds for its landmark NYC run this December @ Theatre 80. Backed by an authentic “Blues Brothers” style band, “With a Little Help” will surely bring everyone on their feet once again in celebration of the late comic genius’s life. Helmed by multi-talented actor Jack Zullo, “With a Little Help” briefly touches down in Los Angeles for not one, but two pared-down intimate previews at The Whitefire Theatre September 25 & October 2nd. Rebranded from "Live From the Grave…It's John Belushi!" which received nominations for Best Cabaret, Most Unleashed Performance (Jack Zullo), and won the Producer's Award at The 2016 Hollywood Fringe Festival, “With a Little Help…It’s John Belushi!” will also benefit two important charities. The Comedians Assistance Fund in LA and Gilda's Club in New York City.

Written, produced, and starring Zullo, who leads a dynamic versatile cast, including legendary musicians Crazy Tomes Band providing the beat and the backbone. The LA previews features special musical guests Guitar Shorty and Robin Russell, who round out the incredible celebratory party of one man’s love of life through comedy and music. The entire pre-preproduction of the show, highlighting the creative and production process is being filmed as a documentary by We Make Movies© award winning filmmaker Eric Michael Kochmer. (The producers are running a Indiegogo Campaign offsetting out of pocket costs and enhancing the budget for the production.)

It’s an out and out full push to make one man’s passion for the late great comedy icon come to realization. Jack Zullo is just that man. Growing up enchanted by the late great SNL legend, Zullo, studied the man, his history, his art, his craft and came up with nothing less than a mesmerizing historical comedic and musical bull’s-eye!

With a Little Help…It’s John Belushi!