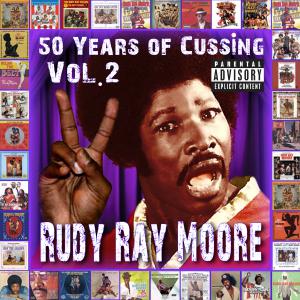 It was solely Moore’s steadfast determination and talent which allowed him to build his brand and break through, at a time when it was incredibly difficult to do so without major industry support.”
— Jim Ervin, Warrior Records

As the companion piece to Vol. 1, the new album contains 35 tracks from Rudy’s extensive comedic career with well-known routines selected from all of his releases, including “Dolemite,” “Pool Shootin’ Monkey,” and “Shine & The Great Titanic.” Vol. 2 also includes never before released material and original Moore tracks used in the upcoming October Netflix motion picture “Dolemite Is My Name” starring Eddie Murphy.

“We’re thrilled to see new fans discovering a truly unsung pioneer of comedy,” says Jim Ervin, President, Warrior Records, who also produced the compilation. “Rudy was a self-made artist. We take for granted the vast availability of distribution and promotional channels available to today’s acts. It was solely Moore’s steadfast determination and talent which allowed him to build his brand and break through, at a time when it was incredibly difficult to do so without major industry support.”

Hailed as the king of the party record and the world’s greatest X-rated stand-up comedian, Rudy Ray Moore’s comic recordings have been embraced by the hip hop community, being sampled by the likes of Dr. Dre, Snoop Dogg, Eazy-E, Eric B. and Rakim, Ice-T, Big Daddy Kane, 2 Live Crew, ODB, Busta Rhymes, and dozens of other platinum-selling rap artists.

“As a ten-year old kid growing up in the hood, I was always listening to Rudy Ray More (or the Dolemite man),” reflects Donald Randell, Moore’s former manager and Executive Producer of the Vol. 2 release. “To later find myself managing Rudy was something out of this world. Traveling and working with the man who could cuss, rhyme, and still keep it cool was amazing. This new release is a masterpiece put together with love for Dolemite’s fans and he did truly love all those who supported him along the way. Listen and enjoy it with laughs, while learning about a trailblazer who paved the way for so many who followed him.”

For decades, Rudy Ray Moore inspired generations of comics and a new breed of rap practitioners. His recordings have become classics to nightclub goers and music buyers. Politically incorrect, surely, but Rudy Ray Moore and his alter ego Dolemite continue to strike a comedic nerve within the stand-up community.

L.A. Entertainment, Inc. is a California based entertainment corporation, with businesses including, Warrior Records, whose products are distributed via eOne Distribution, LA Group Management, publishing divisions that administrate a wide range of copyrights, a music supervision firm specializing in motion picture and television soundtracks, and L.A. Entertainment Merchandise, providing merchandise and VIP services to touring artists.