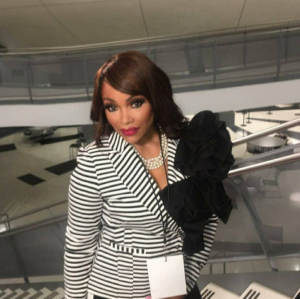 Rhonda Morman as Shelby Brown in BET’s ‘Angrily Ever After.”

Rhonda Morman plays Shelby Brown the villain you love to hate in BET's "Angrily Ever After."

BURBANK, CA, USA, September 21, 2019 /EINPresswire.com/ — Rhonda Morman stars in BET's newest release Angrily Ever After, premiering September 21, 2019 on BET Her at 5:00pm PST, and 8:00pm PST on BET. Angrily Ever After, tells the story of Tia Logan (Jasmine Burke), as she loses her fiance', job, and home all in the span of 24 hours. Rhonda plays Shelby Brown the antagonist who's trouble causing antics stand in the way of Tia re-building her life, and finding the man of her dreams.

Rhonda Morman is a NAACP nominated Best-Supporting Actress best known for her outstanding work in the NAACP award-winning stage play, "Sunday Mourning." Rhonda a gifted actress and story teller who played the lead in the feature films, "Bluest Moon" (Amazon Prime), "CainAbel" (Amazon Prime), "OLE Bryce" and "Stolen Breath the Truth Revealed." Rhonda also had supporting roles in the feature films "Her Little Secret," "The Choir Director," "Throwback Holiday," and "The Runners." Shedding light on the pain and tragedy of addiction, she played the role of Delphine, a heroin addict, opposite of Loretta Devine in The "Lost Souls Cafe," written and directed by Donald Welch, which aired on TV One.

A philanthropist that is always looking for ways to give back to her community Rhonda and her husband own and operate the Better Living Center Headquarters, a non-profit multi-purpose community center in Inglewood, California.

Rhonda Morman is represented by Michelle Brown of MB Talent.