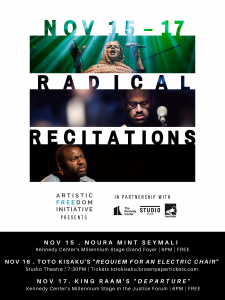 WASHINGTON, DC, UNITED STATES, November 1, 2019 /EINPresswire.com/ — With three days of consecutive performances, Radical Recitations is an arts festival that not only celebrates the human right to artistic freedom of expression and the radical power of storytelling to catalyze social change – it is a call to action in defense of artistic freedom. Radical Recitations is presented by Artistic Freedom Initiative (AFI), who last year brought you Revolutions & Movements at Dupont Underground. This year, AFI has partnered with Kennedy Center's Millennium Stage, Studio Theatre and Tamizdat to bring you performances both powerful and personal by revolutionary international artists NOURA MINT SEYMALI, TOTO KISAKU, and KING RAAM.

As artists are increasingly censored, imprisoned, restricted from moving freely across borders, tortured, or even killed, it is more critical than ever that we safeguard the right to free expression and zealously champion the courageous artists who exercise it. Radical Recitations is being held Friday, November 15 – Sunday, November 17, 2019 in Washington, DC.

NOURA MINT SEYMALI
November 15th | 6pm | FREE
Kennedy Center's Millennium Stage
With her incendiary voice, Noura Mint Seymali is one of Mauritania’s foremost musical emissaries. Born into a line of Moorish griot (traditional West African storytellers, praise singers, poets and musicians), Noura is revolutionary in a number of intentional and consequential ways. Faith in the music, real knowledge of the tradition it comes from and a willingness to pursue a novel vision to intelligently modify Moorish music while locating it on the global cultural spectrum are ideas that drive Noura and her band.

Further, Noura has always led a band that has transcended fraught racial boundaries within Mauritania by regularly working with Wolof, Soninke and Pulaar musicians and collaborating with foreigners. While this is uncommon for Moorish griot, talent and cultural authority allows Noura & Jeich to eschew notions of cultural purity and by doing so, expand, modernize, popularize, and ultimately safeguard this powerful musical tradition. Expanding a sound born of Arab and Sub-Saharan roots, Noura Mint Seymali bends the arc of Moorish musical tradition to fit our contemporary moment. As described by NPR, “the arrival of Mauritanian vocalist Noura Mint Seymali in front of Western audiences feels like the start of a new era.” Recognized by the African Union at the first-ever AFRIMA awards, Noura Mint Seymali was named "Best Female Artist from North Africa."

TOTO KISAKU's "Requiem for an Electric Chair"
November 16th, 7:30 pm | Studio Theatre | Tickets
Toto Kisaku is an award-winning Congolese playwright, actor, director and producer. Detained for putting on plays critical of the Congolese government, Toto arrived in the United States in late 2015 seeking political asylum, which he was granted in March of 2018. His one-man play, Requiem For An Electric Chair, tells the story of his persecution in and eventual exile from Congo and opens with his interview with a U.S. immigration officer. Through this narrative, Toto shares the story of his arrest, imprisonment, and near-death in Congo, and the way his art ultimately saved his life.

In his work, Toto explores themes of transgression, oppression, and poverty, often challenging the boundaries between performance and daily life. Toto is the 2019 International Festival of Arts & Ideas Artist-in-Residence. In 2010, he was the recipient of the Freedom to Create Prize, presented in Cairo, Egypt. The prize is a celebration of the courage and creativity of artists, and the positive influence of their work to promote social justice and inspire the human spirit. Toto was also the recipient of the 2018 Rebecca Blunk Fund award, granted by the New England Foundation for the Arts. Toto has been featured in NPR, ArtForum, and Washington Times.

King RAAM’s “Departure” November 17th | 6 pm | FREE
Kennedy Center's Millennium Stage
King Raam started his musical career as the singer/songwriter/founder of Hypernova, a post-punk band born in the Tehran underground of the early 2000s. A politically active singer, he joined protests and wrote songs that spoke out against the government. In 2011, King Raam launched his solo career as King Raam in Toronto with Songs of the Wolves, a personal and sincere album of love and loss.
In January 2018, King Raams father, Kavous Seyed Emami, a prominent Iranian/Canadian professor and environmentalist, was arrested under false pretenses of espionage. Two weeks after his arrest he was killed under suspicious circumstances in Evin Prison. King Raam and his family attempted to flee Iran, but Iranian authorities detained his mother and confiscated her passport. King Raam and his brother were allowed to depart, but his mother was held hostage in Iran for over 500 days.

In his new work, "Departure," King Raam is channeling his creative energy into a storytelling performance about his family's experience and his father’s legacy, woven together with his music. This project, titled "Departure," is being developed during his residency in the Safe Havens Incubator for Musicians NYC (SHIM NYC), a new residency program for at-risk musicians created by Artistic Freedom Initiative and Tamizdat.
King Raam has been featured in MTV, NPR, The New York Times, Vanity Fair, CNN, PBS, BBC, and VICE.