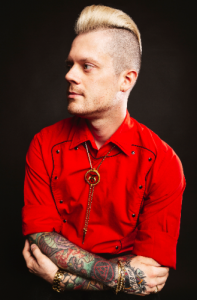 The latest single from the Nashville songwriter bursts at the seams with pop punk energy.

NASHVILLE, TN, USA, November 7, 2019 /EINPresswire.com/ — Singer/songwriter Mark Henes is pleased to announce the release of his newest and most striking single, “Strip Me Down.”

Known for his ability to seamlessly shift from genre to genre, Mark Henes has quickly established himself as a versatile and reliable performer with a deep knowledge of American music. With the casual defiance of “Strip Me Down,” Henes embraces the golden era of pop punk, adding to his already impressive catalog.

Born and raised in Nashville, TN, Mark Henes’ career as a musician seemed almost predetermined. Growing up in the recording capitol of America, he was constantly surrounded by music – the high lonesome sound of vintage country, the sensitivity of the seventies singer/songwriters, the ferocity of the electric blues, he absorbed them all.

By the time he began performing around town, Henes appeared as if he’d been doing it all his life. When Henes ﬁnally started writing songs of his own, he blended all of his inﬂuences into one sound that only he could generate.

In 2018, Henes oﬃcially arrived on the scene with his debut EP, ‘Transitions.’ The EP’s raw bluesy rock feel was well received locally, with one critic praising its “hefty funk and luscious California harmonies.” Feeling newly inspired, Henes followed it up with two more singles; 2019’s ‘Strip Me Down,’ which embraces the spirit of pop punk, and the banjo laden ‘Ghost Train,’ which harkens back to the golden age of country with its folksy melody and dark imagery.

One of Henes’ great strengths is his ability to create instantly memorable hooks. That ability is on full display in “Strip Me Down,” as he sets up a huge chorus over a wall of gritty power chords. “How do you have the nerve to walk around the way you do,” Henes sings, his voice full of conviction and confrontation. The message is simple and direct, showing a young artist at the peak of his powers.

Now, Henes is ready for a national audience with the release of his oﬃcial full length debut. Entitled ‘Crystallized Reﬂections,’ the album embodies everything he is about as an artist. With an eye for poetic detail that matches his muscular instrumental arrangements, he explores the modern world fearlessly, with each track oﬀering a unique perspective all its own.

“Strip Me Down” is now available for download on all music platforms. For more information about Henes, please visit https://www.markhenes.com/.

Singer/songwriter Mark Henes is a living, breathing embodiment of the spirit of American music. Well-versed in everything from the classic honky-tonk of Hank Williams to the electric boogie of Chuck Berry, Henes re-imagines Americana for the 21st century, with high energy songs that range from thoughtful introspection to all out rock.

While many musicians are content to be boxed into one genre, Mark is the rare artist who can draw connections between seemingly disparate styles to create something one of a kind. He is truly unique in the world of singer/songwriters and his music is well worth your time.