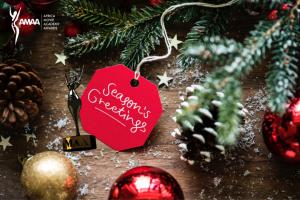 THE AMAA'S CALL FOR SUBMISSIONS FROM FILMMAKERS OF AFRICAN DESCENT GLOBALLY

The awards are presented to recognize and honor the excellence of professionals of AFRICAN descent in the film industry world wide. This includes directors, actors and writers.”
— PEACE Anyiam-Osigwe

LAGOS, LA, NIGERIA, December 24, 2019 /EINPresswire.com/ — The countdown to the 16th Africa Movie Academy Awards (AMAA), the Premier Africa Film Awards® has begun. The Africa Film Academy cordially invites filmmakers to submit their feature, short, animation and documentary works for consideration in 28 film categories of the awards. Submissions are from 25th December 2019. The deadline for submissions is the 1st of April 2020. Late entry deadline is the 30th of April 2020. Nominations will be announced on the 30th of August 2020.

The 16th Edition of the AMAAs will be held on the 25th of October 2020 in Lagos Nigeria and will be televised globally. Only films produced and released between January 2019 and 30th of April 2020 (last day of submission) may be entered for this celebration of African cinema.

The Africa Movie Academy Awards was founded in 2005. Mostly held annually in Nigeria, the AMAAs is without doubt becoming the most prestigious and glamorous African entertainment industry event of its kind. Evolving from a one day event — televised live — to an annually chronicled African event, the AMA Awards is now an established engagement platform for filmmakers, industry professionals and all creative industry stakeholders. The primary aim of the AMA Awards is to facilitate the development and showcase the social relevance of African cinema.

The awards are presented to recognize and honor the excellence of professionals of African descent in the film industry world wide . This includes directors, actors and writers. The AMAAs also serves as a platform that continually unites the Africans through arts and culture.

Over the years, the award presentation has been attended by numerous international media representatives, Hollywood celebrities, Nigerian politicians, other African politicians, journalists, film industry professionals, and actors and actresses from across Africa.

The 2019 African Movie Academy Awards took place on the 27th of October at the Landmark Events Center in Lagos State, Nigeria. The exciting and glamorous event was hosted by Lala Akindoju and Lorenzo Menakaya.

The ceremony presented the best African actor of the year to Marc Zinga – for his lead role in the Rwandan movie, Mercy of the Jungle while Sola Sobowale won the best actress for her lead role in the Nigerian movie King of Boys.

Other winners include Jahmil X. Qubeka, who won the Best Director award for Sew the Winter to My Skin. Cynthia Dankwa of BURIAL OF KOJO won for Best Young Promising Actor. Best Diaspora Short movie went to Bail. Award For Best Animation went to Choices. Best Diaspora Documentary went to My Friend Fela.

Each completed entry for 2020 entries must be accompanied by all the supporting materials listed on the submission forms, including a synopsis of the film, the list of credits, marketing stills of the film, filmographies of the directors and producers, submissions can be made on https://filmfreeway.com/festival/africamovieacademyawards-882089

All films must indicate the year of copyright. The Africa Film Academy will not accept any film that exceeds the 120-minute run as a feature or a short film that is longer than 40 minutes. AMAA awards two major categories of short films and animation. The Academy also awards the category for Best Africa Film in the Diaspora and Best Diaspora Short Film Awards. inclusive of Caribbean Shorts and Caribbean features .In 2020 the Africa Film Academy will introduce a special category for Asian Foreign language category.