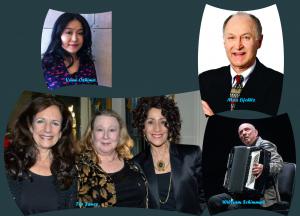 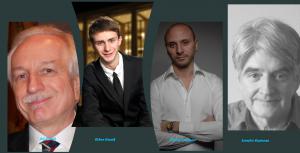 The Janes, “a heavily sequined, glorious-voiced singing trio, performed a comic medley….their raucous audience was on their feet cheering.””
— The New York Times

The event will feature the GRAMMY nominated North/South Chamber Orchestra under the direction of Max Lifchitz performing five exciting and eminently accessible works by living American composers. Soloists for the occasion will include the vocal trio known as The Janes; violist Yumi Oshima and accordionist William Schimmel.

The concert will start at 3 PM and end approximately at 4:30 PM. It will be held at the auditorium of Christ and St. Stephen's Church (120 West 69th Street) in Manhattan. The auditorium is ADA accessible. No tickets or reservations needed.

The following compositions will be heard for the first time:

Edmund Cionek's Once Upon a Homicide for three vocalists and string orchestra is a dramatic work tinged with film noir sensibilities. The music of the three-movement work is full of jazz-inspired harmonies and syncopated rhythms. It conjures dystopian soundscapes, obscure nightclubs and even a brutal killing. Written especially for The Janes Trio (vocalists Christine Ranck, Sula Haska, and Patti Wyss) it employs lyrics also penned by Mr. Cionek.

Leandro Espinosa's Nocturno for viola and strings was written at the request of violist Yumi Oshima a close friend of the Mexican American composer. The music highlights the sweetness and profundity of the viola while evoking the sound of the nightly soul.

Ethan Resnik' Blue Moonlight is a neo-impressionistic work that aims to illustrate how a rare blue moon harmonizes with the warmth of the air under the luminous sky as it spreads its blue light. Scored for string ensemble this is the first time a professional ensemble performs a work by this exceptionally talented young composer.

Willam Schimmel's Variations on a Waltz by Pee Wee King for accordion and strings consists of a series of variations on the million-selling classic Tennessee Waltz written by the country music star Pee Wee King. Schimmel's symphonic work captures the light and dark qualities inherent in King's beautiful melody while giving the soloist ample opportunity for technical display. An acclaimed accordionist, the composer himself will appear as the featured soloist for the premiere of this highly stimulating work.

Davide Tammaro's Nautilus was inspired by Jules Verne's novel 20,000 Leagues Under the Sea. Nautilus is the submarine, which carries the passengers throughout marvelous adventures underneath the oceans. The melodies of this work are often repeated as retrogrades or inversions to connect all elements because at the end, everything belongs to the sea.

Since its inception in 1980, the North/South Consonance, Inc. has brought to the attention of the New York City public over 1,000 works by composers hailing from the Americas and elsewhere representing a wide spectrum of aesthetic views. Its activities are made possible in part, with public funds from the New York State Council on the Arts and the New York City Department of Cultural Affairs as well as a grant from the Music Performance Fund and the generosity of numerous individual donors.