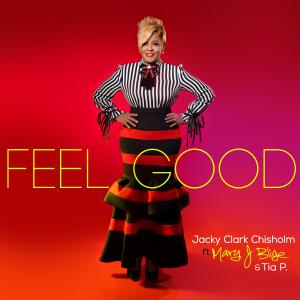 NASHVILLE, TENNESSEE, USA, January 23, 2020 /EINPresswire.com/ — LENITA, Inc. in partnership with Nashville-based United Alliance Music Group is excited to announce the newest solo single "Feel Good," from two-time GRAMMY® Award winner Jacky Clark-Chisholm, of the legendary Clark Sisters. "Feel Good" is set to release Friday, February 7, 2020 and features the legendary GRAMMY® and Golden Globe winning and Oscar nominated singer-songwriter, actress, philanthropist and honorary Queen of Hip-Hop Soul Mary J. Blige. The forthcoming single is the first from Jacky Clark-Chisholm's own record label and this release has been an independent effort for quite some time.

Lifetime Television is also set to premiere the highly anticipated The Clark Sisters: First Ladies of Gospel on Saturday, April 11 at 8pm ET/PT, which is executive produced by Mary J. Blige, Queen Latifah, and Missy Elliott and tells the story of the highs and lows of Jacky Clark-Chisholm and her sisters who are known as the top-selling female gospel group of all time.

About Jacky Clark Chisholm:
Jacky Clark Chisholm is a solo gospel artist, business-woman, educator, evangelist, and member of multiple GRAMMY® Award-winning legendary group, The Clark Sisters. With 16 albums, millions of sales to their credit and considered pioneers of contemporary gospel music for their crossover mainstream appeal and classic performances of "Is My Living In Vain? and "You Brought the Sunshine," The Clark Sisters are the highest-selling female gospel group in history. Chisholm earned an associate of Science degree in nursing, bachelors degree in Family Life Education and is a formidable leader in business. Jacky Clark Chisholm is a former spokesperson for the American Diabetes Association, serves now as Supervisor of Women for the Dominican Republic 2nd Ecclesiastical Jurisdiction, Church of God in Christ Inc., former National Youth Choir Coordinator of the Church of God in Christ Inc. for over 16 years, and was a motivational speaker for fundraisers such as H.O.P.E. South Africa in Johannesburg, South Africa. She was an instructor for the American Red Cross before retiring in 2010.