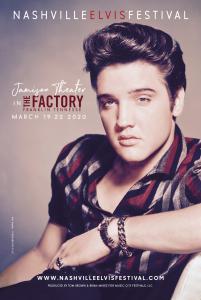 The 4-day festival is filled with celebrity appearances, live music performances and 28 of the best Elvis tribute artists from all over the world.

NASHVILLE, TN, USA, February 12, 2020 /EINPresswire.com/ — Elvis™ fans from around the world will gather in Middle Tennessee March 19-22, 2020 for the 4th annual Nashville Elvis Festival, celebrating the music and legacy of the King of Rock & Roll™. The 4-day festival will be filled with celebrity appearances, special guests, live music performances and more. Tickets are on sale now at www.NashvilleElvisFestival.com.

Nashville Elvis Festival has moved to Jamison Theater in The Factory at Franklin, located just south of downtown Nashville in the charming suburb of Franklin, Tennessee. The festival’s new venue will allow for new vendor space, free parking and larger crowds, as most shows sell out each year.

Legendary entertainer PAT BOONE will close out the festival with what he says will be his final Nashville concert appearance. Billed as an evening of stories and songs, Boone will perform his biggest hits (such as “Love Letters in the Sand” and “April Love”), reminisce about his incredible career, and share some loving memories of his friend Elvis as well. One of America’s most beloved performers, Boone has sold over 45 million records worldwide, starred in 15 feature films, hosted his own hit ABC television series, and he has 3 stars on the Hollywood Walk of Fame.

A highlight of each Nashville Elvis Festival is the Ultimate Elvis Tribute Artist Contest preliminary round, with the winner moving on to Graceland's Ultimate Elvis Tribute Artist Contest Semifinal & Finals in Memphis during Elvis Week each August. 20 contestants have been hand-selected and invited to compete in Nashville, coming from all over the USA as well as Australia, Canada, Norway, Chile, England, Germany and Ireland. Backing all live performances will be Australia’s TIC Band, known for their performances all over the world backing tribute artists and giving the feeling and excitement of being at an actual Elvis concert.

TOM BROWN returns as the festival’s host and emcee. For nearly 2 decades, he has served as a host for Graceland's Elvis Week, Tupelo Elvis Festival and numerous other Elvis events around the country. He can be seen on Graceland's popular "Gates of Graceland" web series, and heard each weekday hosting "Tom Brown in the Morning" on Sunny 93.3 in his hometown of Tupelo, Mississippi.

For tickets or more information, please visit the official website at www.NashvilleElvisFestival.com.