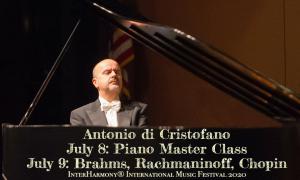 NEW YORK, NEW YORK, USA, February 25, 2020 /EINPresswire.com/ — IIMF welcomes pianist Antonio Di Cristofano to its 2020 Outstanding Guest Artist Series. After the most successful collaboration with InterHarmony and participation at the InterHarmony Concert Series at Carnegie Hall in New York, the appearance of Antonio Di Cristofano for Session I is will be highly anticipated event. Di Cristofano will perform Brahms, Rachmaninoff, and Chopin on July 9 and give a Piano Master Class.

Di Cristofano has performed as a soloist with the Chamber Orchestra of Florence, the Radio Orchestra of Bucharest, Orquesta Sinfonica de l’Estado de Mexico, Istanbul Chamber Orchestra, Czech Philharmonic Orchestra, Toronto Sinfonia, Jerusalem Symphony, Sinfonica di Sao Paulo, Thuringen Orchestra and many others. His Carnegie Hall debut took place in 2006, at the Golden Mall Musikverein in Vienna in 2007. He has appeared as a guest at dozens of music festivals on five continents. He is often invited as a judge in international piano competitions from Louisiania to Moscow to Hong Kong and has taught at the Tchaikovsky Conservatory in Moscow, the Valencia Conservatory, the Sofia Conservatory, the Orpheus Academy in Wien and in numerous American universities. He has recently been appointed Guest Professor at the Xiamen Conservatory in China.

InterHarmony® International Music Festival, founded and directed by cellist Misha Quint, takes place each summer in Acqui Terme, Piedmont, Italy, and Sulzbach-Rosenberg, Bavaria, Germany. It combines multiple concerts of world-renowned soloists and chamber musicians, at the same time providing intensive study programs for young musicians, helping them to climb the steps to world stages of classical music. As part of the Outstanding Guest Artist Series, participants will be brought together with some of classical music's brightest lights, who will perform and give masterclasses. https://www.interharmony.com/