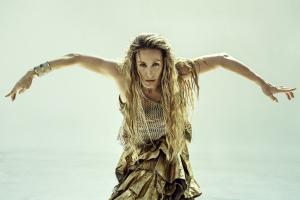 Siudy Garrido is one of the most impressive exponents in the current dance and flamenco scene.

Featuring 12 artists on stage, including 5 musicians, 6 bailaoras and Siudy Garrido, BAILAORA takes the viewer through an intimate journey of most pure flamenco

NEW YORK, NEW YORK, USA, February 27, 2020 /EINPresswire.com/ — Celebrated choreographer and flamenco dancer Siudy Garrido comes to New York with her newest work, BAILAORA WITHIN ME, WITHIN YOU as part of the 20th Flamenco Festival. This bold, cutting-edge production sees flamenco in a multidimensional way, with choreography that integrates different disciplines alongside original music by renowned Spanish flutist Juan Parrilla. A combination of cante (singing) and flamenco guitar, accompanied by the modern sounds of electric guitar and contemporary textures to make this proposal a dynamic and current flamenco work. The performances will be at the Ailey Citigroup Theater (405 W. 55th Street, corner of 9th Ave.) on Saturday, March 21, 8pm and Sunday, March 22, 6pm.

The latest project by this Miami based company is the perfect example of Flamenco Festival’s slogan in its 20th anniversary: “Breaking walls, uniting worlds”; a slogan that promises the audience an intimate and emotional journey. BAILAORA WITHIN ME, WITHIN YOU embodies the personal vision of its director about the evolution of flamenco within her geographical reality in America, cultural influences and training in other dance disciplines. ‘Bailaora’ is the Spanish word for "flamenco dancer", however, its meaning is deeper, implying virtue, excellence and courage and those who know flamenco do not use it lightly. “What defines a Bailaora is not the place of her precedence. A Bailaora is what I have always been and will always be. It's where my everything is born and what I've always fought for.”, says Siudy.

Featuring 12 artists on stage that include 5 musicians, 6 bailaoras and Siudy Garrido, BAILAORA WITHIN ME, WITHIN YOU, will take the viewer through dance and music, along a very personal emotional route that connects directly with the most visceral feelings and thoughts of the human being. The original music is by the innovative composer Juan Parrilla, who changed flamenco with his audacious proposals in the era of Joaquín Cortés, and counts on the collaboration of flamenco guitar virtuoso, Spaniard, José Luis de la Paz, the electric guitar of Manuel Fernández who also participated in the composition of the music, the cante (singing) of Ismael Fernández and the percussion of Gilbert Mansour.

This year Flamenco Festival celebrates 20 years in New York with the greatest flamenco offering ever presented outside of Spain, displaying an amazing program between March 12 and April 5, in 20 different venues throughout New York City, with more than 50 shows carried out by 29 companies.

Siudy Garrido was born in Venezuela and now lives in Miami, Florida. Although under flamenco standards she could be considered a foreigner in the land of this demanding art, she is well respected by other flamenco artists in Spain— hers is the first Latin American company to be invited to the prestigious Flamenco Festival in New York.

Siudy Garrido is one of the most impressive exponents in the current dance and flamenco scene. Globally recognized as an avant-garde artist with a swirl of traditional and contemporary techniques that creates a flamenco style entirely her own, Siudy continues to explore the limits of the art form while honoring tradition. This dancer and choreographer is known for her amazing virtuosity and the bold and innovative approach in her choreographies. She has been considered one of the most genuine artists and praised for being "a brilliant soloist with a vibrant company" (Los Angeles Times). In Bailaora, she has been described as "an expression of the most provocative transculturization" (The New Herald).

Her first steps in flamenco began at 5 years of age at her mother's school. She founded her company in 2000 and went on to create 7 shows of her own authorship. In 2015, she moved Siudy Flamenco Company to the U.S. where she was commissioned by the Los Angeles Philharmonic, under the baton of maestro Gustavo Dudamel, to create her own version of the renowned work by Juan Manuel de Falla, “Amor Brujo”. An encore was presented in 2019 at the Hollywood Bowl with an audience of more than 10,000 people and an excellent review on the front page of the LA Times. She and her company also participated in the acclaimed World of Dance, a show produced by Jennifer López on NBC and with her work “Flamenco Intimo” she carried out one of the most successful tours of recent years both in the US and in Central America.

Flamenco Festival returns to New York from March 12 to April 5 to celebrate 20 years of music and dance in 20 places with a historical offer of 29 companies and 53 shows. This year's event, which bears the theme "Breaking walls, uniting worlds", is the largest flamenco festival ever presented outside of Spain, and will exhibit classical works by acclaimed artists, as well as new works by the next generation of flamenco artists.