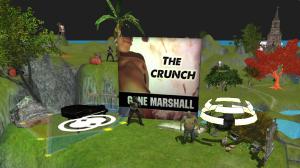 Indie alternative album 'The Crunch' by singer-songwriter Gone Marshall kicks out the jams after being adapted as a retro shooter game by Camerado Media.

Players roam a single sprawling lo-fi level, dripping with bad guys and refried zombies, while seeking out album covers and pianos from 'The Crunch' to trigger each song. Aimed at the non-gamer world, 'The Crunch' game offers a bounteous nine lives to start and plenty of weapons, ammo, and health boost along the way.

With cameos of various venues where Gone Marshall has recently played adorning walls and trees, 'The Crunch' game is a unique and interactive way for listeners to check out some of Gone Marshall's original indie and alternative psych tunes – all while emptying some rounds into the belly of a flabby, cheesily rendered mutant!

Users can download the unique album-game 'The Crunch' for free by visiting the artist's website at www.gonemarshall.com and signing the mailing list. (a link to the download will be sent shortly automatically). Currently available for Windows PC, 'The Crunch' and other upcoming music games by Gone Marshall will be released on iOS, Android, and other platforms in the coming months.

All songs appearing in 'The Crunch' album and game are available for synch placement and licensing in games and other media.

Gameplay from ‘The Crunch’, an Indie Rock Album Relaunched as a Retro Shooter Game by Camerado Media