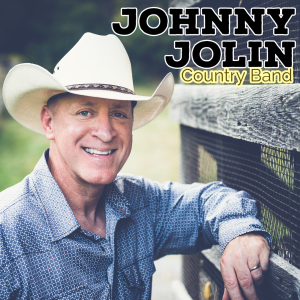 The Country Music craze of the 1990's inspired many to try their shot at a Billy Ray Cyrus shot-to-fame. Johnny Jolin was one of those dreamers.

NASHVILLE, TN, USA, March 20, 2020 /EINPresswire.com/ — Country Artist Johnny Jolin was playing rock guitar when he came home on leave to discover 90's Country taking his hometown by storm. He was immediately hooked and he rode it all the way to charting songs, performances with acts like Randy Travis, David Lee Murphy and Confederate Railroad and later fronting a tour through Asia. His latest release harkens back to those days.

On March 20th, Johnny Jolin releases "Country Band," a song reflecting back to that whirlwind decade that catapulted him to success. The song was co-written by Nashville hit-maker Andrew Scott Wills and co-produced by Toby Keith guitarist/backup singer Dave Smith in Nashville, TN. The release is on LWM Records, who commits to donate 20% of the song's sales to Cup of Joe For A Joe: a program by Green Beans Coffee to deliver coffee drinks to active service military personnel as a simple way of showing gratitude.

"I was reminiscing a little I guess," Jolin says. "I was remembering how Country Music just exploded in the 1990's and you had guys like Billy Ray Cyrus, Joe Diffie and Tracy Lawrence on the radio and all the girls were wanting to dance. That's when I fell in love with Country Music."

However, on the heels of the 1990's came the outbreak of SARS, a severe Coronavirus of its own time, that first appeared in China.

"I came out of the 90's with a lot of momentum and was invited on a two week tour of China in 2002 with massive stops in Shanghai, Wuhan, Ningbo and two shows in Beijing one at Peking University," Jolin remembers. "But it was all canceled due to the SARS outbreak. Although COVID-19 is clearly far worse, I can't help but remember those days. There was a lot of anxiety in that part of the world, much like today."

In 2004, after the SARS threat subsided, Jolin was able to reschedule the tour as a guest of The U.S. China Foundation. "I hope a simple song about better times can give folks a smile," Jolin adds. "I think we could all use a 3 minute escape."

"Country Band" is available worldwide on March 20th and can be streamed on Spotify, AppleMusic, Pandora and is Siri and Alexa compatible. For more information about Johnny Jolin's music or Cup of Joe for a Joe visit JohnnyJolin.com