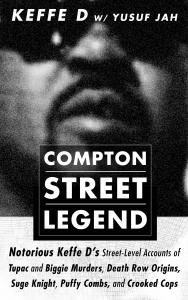 “Compton Street Legend" will put to rest lingering questions about the killings of rappers Tupac Shakur and Notorious B.I.G.

WE WERE BOTH MAJOR PLAYERS IN THE GAME. SUGE HAD THE MUSIC INDUSTRY. I HAD THE STREETS. WE BOTH HAD THE SAME BOSS.”
— Keefe D

LOS ANGELES, CALIFORNIA, USA, May 19, 2020 /EINPresswire.com/ — Bearing first-hand knowledge of situations that have been speculated about for years, Duane ‘Keffe D’ Davis, a former shot caller for the Southside Compton Crips and kingpin of a Compton based drug operation is a man with a stunning story to tell. Best known for his rise to national prominence as one of the only living witnesses to the 1996 slaying of rapper Tupac Shakur, he has been featured on A&E, Fox and the USA Network. Not surprisingly, the media never quite told the whole story nor did Keffe D reveal all of his cards.

To be clear: this isn’t a book of conjecture by police and private investigators or media far removed from the story they are covering. This is an account of someone who not just lived the life but was there for many of the key events surrounding the high profile murders of global rap icons Tupac Shakur and Notorious B.I.G. Compton Street Legend is as authentic a narrative as you will find from a major street player who was intricately involved. His authenticity can’t be denied.
Compton Street Legend offers an extraordinary perspective from a true Compton Gangster. An example of his brutal honesty occurs as he discusses Hip-Hop mogul Sean ‘Puffy’ Combs. “I was rich when I met that motherfucker Puffy…I hate that I ever met that son-of-a-bitch — my life has gone backward ever since. After that Vegas shit, the FBI shut me down on my ass.”

Tupac is also dealt with in a frank and honest way. “Tupac chose the wrong game to play and the wrong niggas to play with. Suge [Knight] and them should have done a better job of protecting that dude…He shouldn’t have ever got involved in that bullshit of trying to be a thug.”

Compton Street Legend goes beyond the unsolved celebrity murders and gives a rare look into the rise and fall of a Compton based drug kingpin, who at his height was moving hundreds of kilos each month. The high profile killings of Biggie and Tupac bought unwanted attention to Keffe’s booming drug business and saw associates crumble. In the end, the FBI Major Crime Unit was able to ‘flip’ eighteen of Keffe’s closest comrades to participate on the grand jury against him.

Convinced of the air-tight case against him and 48 others, Keffe grudgingly agreed to a deal to cooperate and provide information regarding the Tupac and Biggie killings in return for the Feds shredding the indictment and stopping the grand jury.

In what many would consider a “dream” deal where “Not one person went to jail behind any of the shit I said in my interview. In fact, I saved a lot of motherfuckers from going to jail for extremely long sentences with my cooperation. They were poised to take down forty-eight different people, some with life sentences…it allows me to rest a little more peacefully at night.”

In an environment where plea deals, grand jury indictments, and cooperation with the FBI Special Counsel has become commonplace, Duane ‘Keffe D’ Davis’ memoir Compton Street Legend is a raw and thought-provoking tale of a game where no one wins in the end, except the authorities, the prison system, and the morgue.

Compton Street Legend is the story of the explosive consequences when the powerful worlds of the streets, entertainment, and corrupt law enforcement collide. It’s not a story told before and it is very unlikely one that will ever reach this magnitude and touch so many different worlds again.