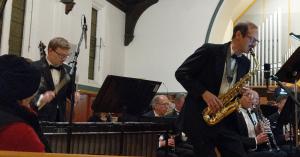 We are honored to represent Boulder, Colorado as a national winner in The American Prize band/wind ensemble community division.”
— Bernard Buster, president, Boulder Concert Band Board of Directors

The American Prize National Nonprofit Competitions in the Performing Arts is the nation's most comprehensive series of contests in the musical arts. The American Prize is nonprofit, unique in scope and structure, and is designed to evaluate, recognize and reward the best performers, composers, conductors, ensembles and directors in the United States, at professional, college/university, community and school levels, based on submitted recordings. There is no live competition.

The Boulder Concert Band submitted "Escapades" by John Williams from Steven Spielberg's 2002 film Catch Me If You Can, recorded by Quam Audio during its March 2019 concert. The piece features band member soloists Tim Hughes on alto saxophone, and Jordan Taylor, vibraphone. It is available on YouTube.

“We are honored to represent Boulder as a national winner in The American Prize band/wind ensemble community division,” commented Bernard Buster, president, Boulder Concert Band Board of Directors. “During my 20 years as a member, this band has been striving to improve the level of our performances. Winning this prestigious contest is gratifying, and confirms that we are indeed making progress.”

Founded in 2010 and now celebrating its tenth anniversary, The American Prize has awarded nearly $100,000 in prizes in all categories since its creation. Thousands of artists representing all fifty states have derived benefit from their participation in the contests of The American Prize. (www.theamericanprize.org)

The first records of a performing band in the city of Boulder date back to 1870. The ICC Silver Cornet Band, as it was known, performed weekly concerts in the pioneer town of Boulder. In the spring of 1897 a larger band organization was formed. This group, called the Boulder Band, was said to be the best organization of its type in Colorado. Later, the Boulder Municipal Band was formed and was the first to include women musicians.

The Boulder Concert Band as we know it today was reorganized in 1976 by the late Hugh McMillen, former Director of Bands at the University of Colorado. Considered to be one of the premier adult community bands in the state, the current organization has more than 60 volunteer musicians. Its members are drawn from the business, professional, and educational communities in the Boulder County and Denver metro area.
Follow the Boulder Concert Band on Facebook, Twitter, or visit the web site at www.boulderband.org.