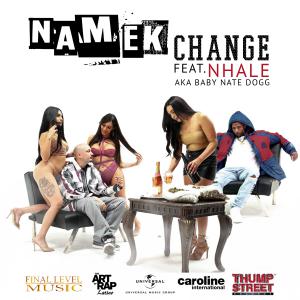 I derive my passion for music in the art of rhymes and beats.
”
— Namek

LOS ANGELES, CALIFORNIA, UNITED STATES, July 8, 2020 /EINPresswire.com/ — Thump Street Artist Namek has just released his collaboration with NHale, the son of the late Singer/Rapper/Songwriter Legend Nate Dogg, from his upcoming album, No Dress Code. The song’s beat, flow and lyrics prove that the G-Funk era, and it’s influence, are still alive and thriving.

Namek, born as Joseph Huicochea in West Covina, CA, has been writing rhymes since the age of 14. As a young teen, he risked everything to express himself with a microphone in hand, making audiences pay attention to his smooth, urban street lyrics dedicated to the ladies & his homies.

Influenced by the West Coast hip hop sound, Namek credits Kokane, DJ Quik, Funkdoobiest, Cypress Hill and Tha Dogg Pound with creating the foundation for his production and lyrical styling. Asked about where he derives his passion for music, Namek says, “in the art of rhymes and beats”.

After starting his musical career in LA’s underground Hip Hop scene, Namek began making a name for himself in local rap competitions. He started to turn heads when he won 4 consecutive 16 bar rap contests at Ab Rude’s annual “Flow And Tell” showcase, thrown at The Airliner, a historic Los Angeles nightclub. This increased profile led him to become an artist on Ab Rude’s “Keep The Feel” crew, and started to open new doors for the talented musician.

If that wasn’t enough for the young rapper, he entered into local Hip Hop radio station Power 106’s Freestyle Friday’s competitions, where he remains undefeated to this day. Currently making regular appearances on the station, as well as LA’s new Hip Hop outlet Real 923, Namek plans to continue his momentum and reignite the passion for the GFunk sound.

Now a part of Thump Street and Ice-T’s New Venture, Final Level Music, helmed by Hen Gee of the iconic Rhyme Syndicate, Namek is poised for a breakout year. Full album, No Dress Code, will be available everywhere on July 24th.

For more on Namek, visit:
https://www.instagram.com/namek626/