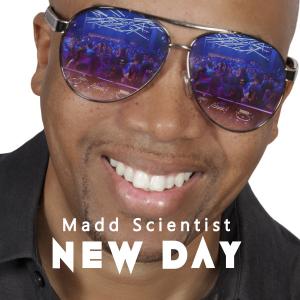 The NEW DAY EP is music for people who enjoy night club venues, VIP bottle service, and weekend day parties, and features an exciting mix of West Coast hip hop, reggaeton, and dancehall. “I love the atmosphere and intimacy of night clubs,” says MADD SCIENTIST, which shines through on tracks like “Madd Krazy,” “Take Flight feat. JTLR,” “Grinding Me (Gucci Girl),” and the way too hot for radio “You Nasty.”

MADD SCIENTIST musical influences include A Tribe Called Quest, Redman, Method Man, Erik Serman, Calvin Harris, Lil Wayne, and Lil Jon. The 2016 Mass Appeal EP that introduced MADD SCIENTIST to the scene featured the groundbreaking singles “Vegas Pool Party” and “Move It.” Following the success of “Vegas Pool Party” as a college radio anthem and the various night club remixes of “Move It,” MADD SCIENTIST released a second EP in 2016 named Scientific Evolution, which included the singles “Kiss Me with a Sound” and “SLTB.” Notably, the “SLTB (Reggaeton Remix)” was the first official reggaeton release for MADD SCIENTIST.

The next MADD SCIENTIST release Long Journey Home was a compilation of songs that cater directly to the Long Beach open format DJ style, a mix of West Coast hip hop, reggaeton, and dancehall music. The cultural diversity of the city of Long Beach requires that DJs and promoters know a wide mix of musical styles and club fans. MADD SCIENTIST is also a frequent patron of the underground Belizean After Hours Party scene, which gives him more exposure to dancehall, reggae, Soca, and Afro-beat music.

As a history junkie and Black Studies major at Long Beach State University, MADD SCIENTIST enjoys discovering the evolution of West African Music through the Caribbean, South America, and North America areas of the world (which he calls the “Music of the Enslaved” that has become the unofficial musical voice of the world), and bringing those influences and sounds to his music. MADD SCIENTIST maintains core beliefs in God, Pan-African Music, Hedonism, and the goodness of people.

MADD SCIENTIST plans to DJ and perform at night club venues around the world. “I specifically want to host a residency in a Las Vegas Night Club on a Friday Night,” he enthuses. “I consider Friday the night where you can truly be free to allow yourself to be hedonistic.” Ever the entrepreneur, MADD SCIENTIST also plans to create his own Fitness Brand. “I believe that fitness is the understanding and mastery of your physical body,” he says. “This is a lifelong endeavor towards understanding God’s creative process. I don’t consider myself religious, but I have a strong belief in spirituality, which starts with mastering the total extent of your personal physical body.”

The NEW DAY EP from MADD SCIENTIST will release in stores and online August 14, 2020.

For Press and Interview inquiries please contact Billy James of Glass Onyon PR at (828) 350-8158 or glassonyonpr@gmail.com