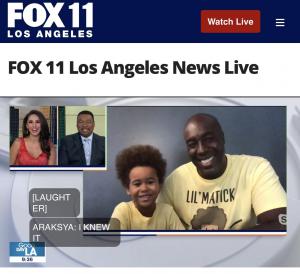 LOS ANGELES, CALIFORNIA, UNITED STATES, August 7, 2020 /EINPresswire.com/ — 5-year-old singer/songwriter Lil' Matick made his television premiere today with a special appearance on the hit morning show, "Good Day L.A." on FOX TV. Lil’ Matick appeared with his father, Will Luke, to talk about his new song and music video that shares a message about the quarantine and Covid-19. Lil' Matick wrote and conceived the project to express how much he misses hugs in light of social distancing.

"I Love Hugs" was written and conceived by Lil' Matick. Since the posting of the music video on YouTube, the video has soared to over 2 million views in less than a month since its streaming premiere.

When asked about the message of his video, Lil' Matick shared, "We all are in this together. We all will get through this pandemic together, and soon we will hug again."

When asked his thoughts on the video, his dad shared, "When my son came to me about this song, he said he wanted to record it and a video to make people feel better during Covid-19. I gave him my support and he led the way in the studio. This is all him. I got a chance to see his passion for music and that he truly cares about people in this world." Lil' Matick teamed up with his dad, Will Luke, and Courtney Benson, to create the song and video. As a celebrated industry executive, Courtney Benson discovered and managed the career of Grammy Winning recording artist, Nelly.