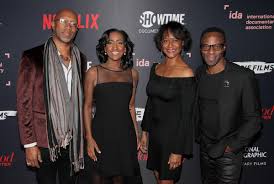 On a production that promoted Afrocentric culture in a thrilling artistic form, Christian Epps discovered talent and continued his life’s work in a special way.

LOS ANGELES, CALIFORNIA, UNITED STATES, August 9, 2020 /EINPresswire.com/ — Your IMDB page is a library of amazing projects, tell us about your journey in your own words.

I got into the business by accident because I could get out of class early – literally that’s all the reason I had and all the reason I needed! When I was in high school. I was not a great student until I found this thing. I had bad grades until 11th grade. Then I moved to Atlanta. Northside High School happened to have a Performing Arts division. It was called Northside School Of The Arts and while sitting in the office waiting to get registered the only boy I knew told me that if I got into the program I could get out of class early. I was like, “sign me up!”. If I can get out of class early, I'll sign up for anything. That's a lesson in following your spirit!

OK. So how did the project land at your desk?
I detailed the full story here. After the October meetings in South Africa I went back home to Los Angeles. I got a call from Blitz Bazawule in early November. Blitz is a well known musician. He’s Ghanaian by birth and lives in the US. We had done a job together in Senegal about four years ago and had lots of great talks and visions for Africa, and the Diaspora. We had mutual interests on how to activate our vision around these subjects because there are groups of people who agree with our ideas, but don't necessarily act on it. There aren’t many unicorns like me – who work with A-List talent in Hollywood and have 15 years of experience around Africa – so my name tends to get thrown in the hat on certain projects. He called and told me about this production and the confidentiality of the client and we went to work on doing the job.

How did the trainees get involved?
Well, I had already made a request from the producing team well before we started shooting to get the trainees involved. However, it wasn't in the budget so we said we’d wait until we get back to Johannesburg and consider it.

While shooting in Kwazulu Natal some of the original crew left the show so I saw that as my moment to strike! I hit up Akin Omotoso and said something like “Hey, We're short handed. I'm looking for an opportunity for these young people. We could put some more bodies to work. ” He agreed. Of course the energy of a fresh group of young people would do any production good and in this case it did not cost the production anything since the District was paying all their expenses.

How was it working with Beyonce?
Professional. She has an amazing work ethic! Blitz, Michael and I did her shoot in Los Angeles. I had worked with her previously in 2006 for a concert in Lagos, Nigeria. I saw then why she is Beyonce! She’s professional and gets to work with no minutes wasted, no attitude, and always calm and kind. I recall we had a situation with a slightly complex set that required some extensive set up time. While everyone else stressed about the time, she asked me how much time I needed and adjusted her activities accordingly – no grandiose attitude or anything. She has so much experience – she knows exactly when to walk and when to run.

You had a balanced group in terms of gender. How did that work out?
There's a special element to it for the women in the group. We all know South Africa has a lot of challenges these days in terms of women's safety and well known cases of gender based violence. I am sensitive to that and I was glad we had women on the crew and working in various departments. We never allowed any forms of ill treatments or bad behavior. It was also interesting to see the women take the lead and teach the guys. Most people know that women are hard workers and

You have been training media professionals on the continent for a while. What drives your passion for teaching at LCD?
I grew up in St. Thomas, Virgin Islands, where life was pretty simple and fun – beaches, fishing, carnival and close-knit families, and where Black culture is the norm. I went to Northside School Of The Arts for the last 2 years of high school and I can tell you that it inspired me and gave me direction in life! And taught me to love musicals and plays and the process of investigating our inner-selves. Prior to that I was a bad student – low grades and always minor discipline problems. After getting into the performing arts program on the lighting crew I became a good student, never in trouble and I even became the co-president of my senior class. Howard University was and is a Mecca for Black education and loving one’s self. I continued teaching right after graduating from Howard University Theater Department and it was the best job of my life. All of these things combined provided a foundation for expecting work to be enjoyable, to be fortifying, and to be of service to other people. I luckily haven’t really had any jobs outside of the theater, film and television industry. It does my soul good to contribute to the next generation, to make the world better than how you met it and to have fun while I do it.Just like that, a plan comes together. The trainees joined us for the next week of shooting. I had some of them come to the hotel to meet Blitz since we all didn't really know each other well. I kind of wanted to look them in the eye and see how serious they were while getting a better understanding of what they're bringing to it. They were sharp. Everybody felt good about it.