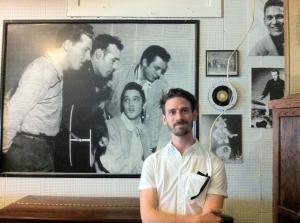 Ben Kopel, the author of Victory, discusses his book of poetry with Jack Christian of BOMB, the popular online magazine dedicated to artists of all disciplines.

AUSTIN, TEXAS, UNITED STATES, September 14, 2020 /EINPresswire.com/ — Jack Christian of BOMB Magazine describes Ben Kopel's book Victory, as an energetic, noisy book of poetry. During the interview, Ben Kopel explains that he wrote the book over a five-year period. "It wasn't until about two years into it that I even realized it was becoming something resembling a book," he says.

Ben Kopel goes on to explain that some writers sit down with a certain goal in mind of what it is they are trying to achieve. This wasn't the case for him, however. Ben Kopel says that as he continued to work on the project, he began to notice subtle connections between the poems. For this reason, he divided the book of poetry into 7 sections with 7 poems in each section. When Jack Christian asks why he settled on 7 sections, the poet replied, "Seven itself is a special number. It's a holy number."

Ben Kopel's work is heavily influenced by music, especially music of the pop, rock, and punk genres. When asked what connections he drew between rock and poetry, Ben Kopel explains that his writings are not about the style, it's all about the energy. He says he wants people to feel the same thing others feel when they listen to an artist belt out the lyrics to a song. He says part of his goal is to kill apathy with heartfelt action. Besides music heavily influencing his poetry, Ben Kopel places heavy emphasis on the Youth.

"These poems are often very much in praise of capital-Y Youth because that is where we come from and that is where we are going," he says.
When asked about his process for coming up with poems, Ben Kopel states he doesn't really have a process. He says he is just moving his hands, placing one word after another while watching the sparks fly. Besides writing poems, Ben Kopel also teaches poetry to high school students in New Orleans. He states that teaching high-school students is as exciting and inspiring as a book of poems. The writer and teacher says of his students that whether they realize it or not, they are in awe of the beauty of this world.

Ben Kopel was born in 1983 in Baton Rouge, Louisiana. He holds a degree from Louisiana State University, the University of Massachusetts Amherst MFA Program for Poets and Writers, and the Iowa Writer's Workshop. His book of poetry, Victory, is currently available on Amazon.