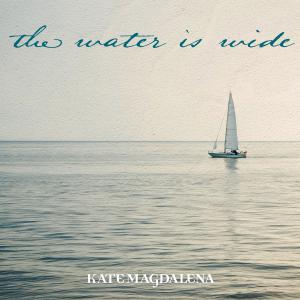 In moments of transition, music can provide a backdrop for living, and Kate Magdalena provides just that with her latest release 'The Water Is Wide'

I want to encourage you, as I also encourage myself: this is not the end, and there is much unseen and unheard to look forward to.”
— Kate Magdalena

SAN FRANCISCO, CA, UNITED STATES, September 14, 2020 /EINPresswire.com/ — Kate Magdalena, a folk singer/songwriter from the Bay Area, has released a new collection of moving songs, 'The Water Is Wide'. The album is available on all major music platforms and streaming services. Through this collection of songs, Magdalena hopes to inspire thoughts of beauty, grace, and truth for her listeners.

The album was recorded in Nashville, TN under the direction of famed producer, Billy Smiley. It features nine songs to soothe and lull, to surf and sun by, and beat the pavements of the city as well. Including some of Kate’s most recent releases including, ”I Know A Heartache When I See One,” “Downtown,” and “Shores of Avalon,” listeners will also hear five new unreleased songs of water and land.

The album opens with “The Waking,” written from the well-known poem by poet Theodore Roethke. The iconic “Downtown” will be beloved by any listener who grew up in the city, while “Backstory” takes a heavier tone, addressing the corruption of the elites who have infiltrated the U.S. government. Magdalena also covers “I Know a Heartache When I See One,” made famous by Jennifer Warren, and the beautiful ballad “Shores of Avalon” by Tina Malia will stay with listeners long after the album comes to a close.

The Water is Wide

I Know a Heartache When I See One

The Water is Wide

In light of the recent worldwide events including the COVID-19 pandemic, a turbulent political climate, and civil unrest, Magdalena acknowledges the internal conflict she faced about releasing new music. She also struggled recently with chronic pain that kept her from many of her plans for 2020. But as the songs came together, Magdalena realized the theme of water throughout the album. Water is an agency of healing because of its softness, endurance, and ability to wear away and remove. And because of this realization, Magdalena decided there was no better time to release this music into the world.

“I want to encourage you, as I also encourage myself: this is not the end, and there is still much unseen and unheard to look forward to.” – Kate Magdalena

Kate Magdalena has also released a handful of new music videos for the songs on her YouTube channel, including "The Water Is Wide," "A Larger Dance," and "Shores of Avalon." The songs from The Water Is Wide almost function as a promise to its listeners. This is not the end, and there is still much unseen and unheard to look forward to. And with each song playing one after another, Magdalena hopes listeners will find hope and a little joy to take with them.

Engineered and Mixed by: Billy Smiley and Billy Whittington

Kate Magdalena is an independent singer-songwriter out of the San Francisco Bay Area, whose songs have been aired on country radio nationally. Most at home in folk-pop and adult contemporary, she calls her genre ‘Timely Americana’, as she is inspired to write for the particular times in which we live. Kate was selected by BWH Music (Boston) as one of 2020 Women to Watch: Best Female Independent Artists, and her recent album “The Water Is Wide” was just nominated for the 2020 W.A.M. Awards category of Best Album in the Adult Contemporary genre. The album, released in August 2020, contains 9 songs of water and land.

In November of 2019, Magdalena released her second album of songs, with Grammy nominated producer Billy Smiley (Johnny Cash, WhiteHeart, Clay Aiken) titled “A Larger Dance” with singles – Be the Lark, New Earth, Battle Hymn, Streets of Any Town. The full album includes songs by Leonard Cohen, Sinead O’Connor,
and Crosby, Stills & Nash The title track “A Larger Dance” was chosen by BWH Music as one of the
best songs of 2019. Kate’s first album “Acquainted With the Night” was released in 2018 and contains the song “United (to Save the World)” (featured in the album “Peace Street” by BWH Music. Kate is at work on an EP for Christmas time, and on her album expected spring 2021, “CANYONLANDS.” She lives happily ever after with her husband Randall in Northern, CA and Franklin, TN.

The Water Is Wide, Kate Magdalena