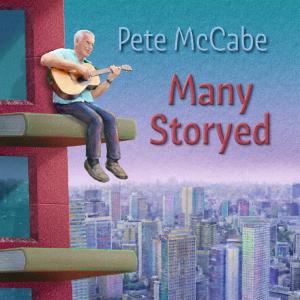 Pete McCabe sits high in the pantheon of singer-songwriters.

"Many Storyed" is a fun album of original and imaginative songs that tell quirky off-beat stories.

VENICE , CALIFORNIA, US, September 23, 2020 /EINPresswire.com/ — Popular singer songwriter Pete McCabe has written six songs for his eclectic new EP. They are: "Forgotten Folkies," "Ghosts From Your Past", "A Protest Doughnut," "Hair of the Dog," Maybe Mae" and a rockin’ bonus track. Also included is a stunning instrumental performance of the traditional song "Simple Gifts."

This album is rich with interesting and well constructed lyrics. The music is complex yet easygoing.

Pete says, ”Variety is the spice of life, right?” “Many Storyed” is just that. Pete McCabe is a musical storyteller who performs and arranges his original songs. He writes in the pop, county, folk, and even gospel genres. Pete has seven album projects to his credit.

This album is a collection of songs that reflect cultural trends as observed through the lens of his life experiences. The sweetly comical "Forgotten Folkies,” is about an aging acoustic troubadour who looks back to his 1960s heyday and wonders how he fits into the world of today.

Pete’s music got attention in the mid-1970s with his album "The Man Who Ate the Plant.” He was described as a "psychedelic folk" artist. Pete has since released seven CDs on Man8Plant Records. Along the way, he has honed his skills on acoustic guitar and piano.

With the help of select collaborators, he has become skilled at home recording and arranging. On each album he sings all the voices and plays most of the instruments.

His music has been influenced by The  Beatles, Randy Newman and Harry Nilsson along with jazz and classical composers.

Pete is one of the rare original singer-songwriters that hits the spot in both your heart and mind.