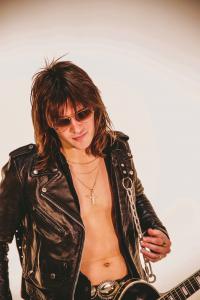 The music video features a high-energy, rock-n-roll inspired performance by Starliner, including animated clips inspired by Stanley Kubrick’s 2001: A Space Odyssey. The video is a fitting visual matching the energy and motivational theme of the song.

“Never Satisfied” has its foundation in rock music, but the synths, addictive melodies, and other pop elements included create a unique pop/rock blend. This single is just the first of Starliner’s upcoming releases, and has garnered attention from publications such as Thrive Global and Music Existence.

Formerly the lead guitarist for the band The Drugstore Gypsies, Starliner still has a lot more in store for his fans.

“I would like to just spread positivity,” he said in a recent interview. “I think people underestimate the power of a smile.”

Dillan Dostál, known by his artist name Starliner, is based in Houston, Texas. From a young age, he’s been glued to the guitar, gravitating towards rock music especially. He’s been touring in bands ever since. Most recently, he was a member of The Drugstore Gypsies, a touring rock band featured in publications like Rolling Stone. This year, he has several new music releases on the way, starting with the single “Never Satisfied.” Later this year, he’s also set to drop his first solo EP, 20/20.