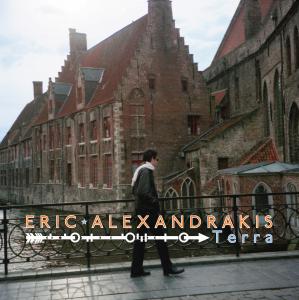 TERRA was written and recorded around the world.

LOS ANGELES, CA, U.S.A., September 29, 2020 /EINPresswire.com/ — Grammy® nominated artist Eric Alexandrakis has announced the release of TERRA, his new double album comprised of 28 eclectic Alternative tracks. Coming on the heels of I.V. CATATONIA: 20 YEARS AS A TWO TIME CANCER SURVIVOR, which was nominated for a BEST-SPOKEN WORD at the 2019 Grammy® Awards alongside artists such as Michelle Obama and The Beastie Boys, Alexandrakis is, once again, pushing his creative skills beyond the established norm.

TERRA is a 28-track travel concept album whose sonic innovation tells a story with metaphorical whimsy. Alexandrakis composed and performed all of the music on TERRA on a 16-track recorder, with only one to two takes per recorded part. “Computers are a rabbit hole; using the 16-track pushed me to come up with the best ideas possible with what little I had to work with, and most of all, forced me to play and perform everything [with a little help from friends here and there including John Taylor (Duran Duran), Steve Ferrone (Tom Petty & The Heartbreakers, Duran Duran, George Harrison, Eric Clapton), composers/producers Starr Parodi & Jeff Fair, up and coming artist Isolde Fair, producer/engineer Kirk Kelsey (The Smashing Pumpkins, Keith Urban), and Eric's 13 year old son, who played drums on one song]".

Always pushing beyond established genres, this release shows off Alexandrakis' love of late 60's pop music, New Wave and soundtracks, perhaps an amalgamation of The Beach Boys meets Pink Floyd, meets Duran Duran. Written and recorded around the world, TERRA is a melodic snapshot of Alexandrakis' world, combining his love of music, travel and film, with the tracks representing his emotions, feelings and experiences. “Terra is essentially my world. We all have our own "Terra". Your experiences would sound much different than mine, and I'm excited to share mine.”

Highly creative since childhood, Alexandrakis is a student of all artistic disciplines. Along with his album releases, he composes for commercials, television, film, and has even charted nationally with two original Christmas songs and productions for other artists. He is also involved in film production, and was fortunate to have a film he conceptualized and scored, short-list at Cannes Lions in 2017 [PSYCHOGENIC FUGUE starring John Malkovich and directed by Sandro]. Alexandrakis was the first person in the industry to produce music on a digitally watermarked CD, and he continues to find innovative ways to express himself through his songwriting, productions, and company Minoan Music.

TERRA by Eric Alexandrakis is out now via Apple Music.