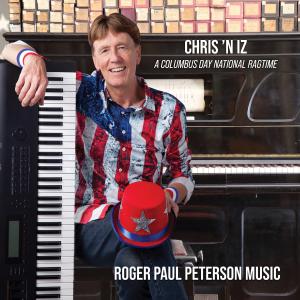 ORLANDO, FLORIDA, UNITED STATES, September 29, 2020 /EINPresswire.com/ — In what may be the first major national record release specifically designed to celebrate Columbus Day, Roger Paul Peterson is releasing “Chris ’n Iz — A Columbus Day National Ragtime” in time for this year’s Columbus Day, October 12, 2020. While Columbus Day and Columbus statues have grown more controversial in recent years and months, the Orlando-based multi-keyboard musician/composer notes that “Columbus Day is a Federal Holiday, first proclaimed an official holiday by Republican President Harrison in 1892, then designated a national holiday by Democrat President Roosevelt in 1934. Columbus Day has support from both sides of the aisle” (https://rogerpetersonmusic.com/about-columbus-day).

Resting on top of a driving mixture of American country pop rock and African American-influenced honkey-tonk ragtime, the lyrics to “Chris ”n Iz” recount both sides of the Columbus story (both the good and bad), resolving in a patriotic “God Bless the U.S.A., on this Columbus Day!” sung first in English, then in Spanish. In preparation for his release of “Chris ’n Iz — A Columbus Day National Ragtime,” Roger Paul Peterson examined more than 20 sources of historical Columbus-related information, including Columbus’ own letters/logbook/diaries. Peterson was pleasantly surprised about the many good things he learned about Columbus, in spite of the bad things that did take place. Peterson wrote up these often-ignored truths (both good and bad) in a free 6-pg paper: https://mailchi.mp/89bfdf8547a9/columbusreportrequest

Growing up as a preacher’s kid in the small farming community of Dayton, Iowa, Roger Paul Peterson had ready access to piano and pipe organ at church. He spent thousands of hours playing those instruments — everything from frisky rock ’n roll to resounding church hymns. Now with 16 years of classical piano training and decades performing in live bands as a multi-keyboardist in schools, churches, colleges, bars, ballrooms and concerts, Roger plays with passion and precision. As a musical composer and recording artist, he uses up to eight acoustic and electronic keyboards, including midi access to more than 1,000 different instruments and sounds when recording. One of Roger’s remarkable recording skills is creating stunningly realistic computer-generated musical instruments and sounds — then programming his computer to play those sounds into his recording software.

Roger’s music is shaped by his classical training, coupled with the 1970s-80s decades of pop rock radio music, coupled yet again with the 1990s-to-date influence of Christian radio music and church worship music. Music influencers include German composers J.S. Bach and George Frideric Handel (“The Messiah”), African American Scott Joplin (ragtime) and British multi-keyboardist Keith Emerson. His styles range from honky-tonk/ragtime piano to electro-techno synth, from pipe organ to country rock, and from progressive symphonic rock to secular, sacred, pop and worship.
Along with other members of his first rock band “Mourning Glory,” Roger was inducted into the Iowa Rock ’n Roll Hall of Fame (2016). Roger has worked with Kenny Rogers (1999) and Apple Records/USA Manager for “The Beatles” Ken Mansfield (2011), in addition to Christian recording artists Diana Pierce (1997–2000), Steve Green (2019), and Dick Tunney (2019, 2020).

Roger was a passenger on TWA Flight 841 in April 1979, which went out of control at 39,000 feet, making two complete barrel rolls and plunging over 35,000 feet in an accelerated nose-dive before making a miraculous recovery 44 seconds later. He has appeared four times on NBC/CBS network television regarding this incident, including the Tom Synder Tomorrow Show in April 1979 and the CBS Reports’ 1983 Peabody Award-wining investigative documentary “The Plane That Fell From the Sky”, in which Roger and other actual passengers and crew portray themselves while re-enacting this true-life, death-defying story which can be viewed on Roger’s YouTube channel (https://www.youtube.com/user/RogerSTEM).

My new single, “Chris ’n Iz — a Columbus Day National Ragtime” will be released October 1st on all major streaming platforms, twelve days prior to Columbus Day 2020. “Chris ’n Iz” shares both sides of his world-changing story. Columbus wasn’t perfect. We should never condone violence, slavery or forced conversions. Failing in his attempt to find a new trade route to Asia, this courageous explorer did locate the Americas in 1492. Did bad things happen as a result? — yes. But good things happened as well.

We still have more work to do, to fully achieve impartial, equal justice under the law for all men and women of all ethnicities in these United States. We desperately need each other’s hand in this worthy quest. Thank you, Christopher Columbus, for bravely sailing into what became a new worldview of life, liberty and the pursuit of happiness for millions of people — those God-given, unalienable rights for all people from all ethnic cultures in our beloved United States of America.