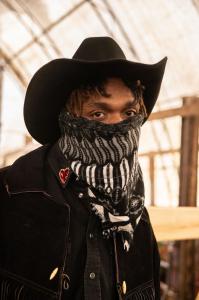 “Wild Wild West” is off Chino’s upcoming new EP, set to be released early next year.

Chino brings a unique take on growing up in the streets of Birmingham, Alabama, with his new track, “Wild Wild West”. He discusses the “wild” lifestyle he lived on the west side of the city. Living as a southern country boy where wild things went down all the time, Chino nicknames it the “Wild Wild West”.

“Wild Wild West” is available now on all major platforms. Chino plans to release a new EP later next year, follow him on Instagram to stay updated on the upcoming release and other activities.

CEO Chino Marley grew up between Birmingham, AL, and New Orleans, LA. From a young age, he loved music and would rap for his teachers. He also had a fascination with computer technology, often taking things apart and eventually teaching himself how to read wires and put them back together, using this same inquisitive, observational approach to write his insightful and penetrating lyrics. Growing up without a father figure, Chino ended up turning to the streets, until a prison cell prevented him from witnessing his child’s birth. Since then, he’s focused on his music and entrepreneurship, while putting fatherhood at the forefront of his life. Chino has toured around artists like Lil Jon, Mike Epps, and Pretty Ricky. Now based in Atlanta, he has recently been named Southeast Independent Awards’ 2020 Male Hip Hop Artist of the Year.