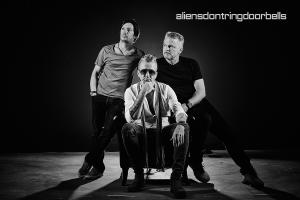 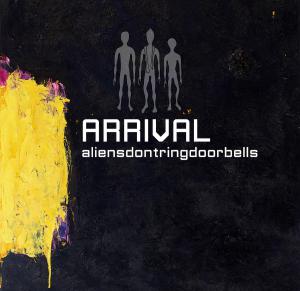 aliensdontringdoorbells convey an undeniable ear for melody and a keen eye for the mainstream with their effortlessly timeless sound. When it comes to music, the band cites OneRepublic, Maroon 5, and Weezer amongst their influences. Their sound is an amalgamation of pop, rock, jazz, prog, and swing. Nowhere is this melting pot of influences more apparent, or more successful, than on the album’s second single, “It’s Your Night,” which has been heating up the Top 40 radio charts. The perfectly themed video–set in space, of course–can be seen now on their official YouTube page.

Today also marked the release of their latest single, “Slipping Away,” and an accompanying video which can be seen on the band’s official YouTube page.

The trio (singer/guitarist Dorian Foyil, singer Adam King and singer/keyboardist Christian Pearl) originally hail from the U.S. and U.K. but are now living in Spain and the Bahamas. They connected years ago in the Costa Blanca region of Spain, and it wasn’t long before they realized they had more in common than the love of an outrageous band name.

In the summer of 2019, they took their shared passion for music and songwriting into the acclaimed Sanctuary Studios in the Bahamas, laying down demos to attract the attention of top-notch producers. Attract they did, with Jeff Kanan (Kelly Clarkson, No Doubt, Sting), Matthew Tryba (One Republic, Maroon 5, Taylor Swift) and Dan Konopka (drummer of OKGO) stepping up to the plate. After spending three weeks at The Keep Studios in Denver, CO, these pros had 12 songs written and recorded, some were crafted pre-aliens, some written together and some on the fly. They all had one thing in common though: they were uncommonly good.

With the help of drummer Kevin Dean and bassist Earl Forbes, studio musicians from The Bahamas and former bandmates of Foyil, ARRIVAL is a stellar tour through the highs and lows of just living life. Infused with sincerity and an emotional wallop, aliensdontringdoorbells deliver lyrics that are philosophical without being sentimental, along with a musical dexterity that can only come from playing your whole life. Their songs serve as an edgy musical package that gives a nod to their influences while still sounding completely original, resulting in an auditory party that fans and newcomers alike won’t be able to stop listening to.

Their breakout first single, “Story,” which quickly gained an impressive 15,000 streams on Spotify in one month, was released July 17 and has also garnered radio airplay and press around the world. It can also be heard on all major streaming platforms, including Spotify, Apple Music, and Amazon. A poignant video can be seen now on the band’s YouTube page.

In an early review of ARRIVAL, the Record-Journal (CT), declared, “The album is just filled with hit singles ("Important" and "Blind To See"), which are waiting to be uncovered.” While Phil’s Picks praised, “aliensontringdoorbells’ debut album ARRIVAL is an interesting presentation from the up-and-coming independent pop-rock band.  That is proven through its musical and lyrical content alike, which largely takes audiences back to the late 80s and early 90s…  is a presentation that rock fans, in general, will find a good way to make “first contact” with the band.”

These are exciting and early days for this international three-piece team of singer/songwriters, but the quest for building a solid fanbase is well underway. Proving that rock ‘n’ roll is alive and truly kicking, aliensdontringdoorbells are here to stake their claim on the territory which is rightfully theirs which is on every fan’s playlist.