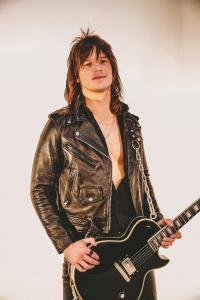 “20/20” Available Now on All Major Platforms

While Starliner feels this new single can be left up to interpretation, “20/20” could be seen as a tribute to the nostalgic/living in the moment vibe. Originally written a few years ago, the single now has new meaning in such an unknown time worldwide. “20/20” encourages listeners to cherish their past memories but focus on the here and now, as it’s all we have.

The dynamic song, “20/20” finds its foundation in rock n roll while highlighted with some pop influences. “20/20” is unique to other songs Starliner has written, as it features a variety of arrangements.

“20/20” is the second and highlight single off of Starliner’s first solo EP, 20/20. Since it was the first to be written, the song influenced many of the themes in the same-titled EP. Both projects under the name “20/20” embody the meaning of time; how we shouldn’t focus too much on the past or future and instead be in the present. With a mixture of sounds and moods, Starliner invites listeners to find their own translation of the single, “20/20”.

While building up a well-established career in the rock genre, Starliner dreamed of adding pop notes and melodies to his music. Since embarking on his own, Starliner has been able to combine his experience and passions into a masterful solo project.

“20/20”, the single, is available now on all major platforms. Follow Starliner on Instagram to stay tuned to his upcoming activities.

Dillan Dostál, known by his artist name “Starliner”, is based in Houston, Texas. From a young age, he’s been glued to the guitar, gravitating towards rock music in particular. He’s been touring in bands ever since. Most recently, he was a member of The Drugstore Gypsies, a touring rock band featured in publications such as Rolling Stone. This year, he has several new music releases on the way, starting with the single “20/20.” Later this year, he’s also set to drop his first solo EP, 20/20.