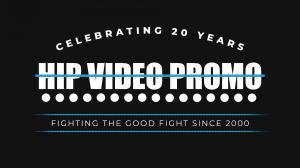 We know that a good music video isn’t merely a commercial or a promotion: it’s a piece of the musician’s soul.

SOUTH RIVER, NJ, USA, October 26, 2020 /EINPresswire.com/ — Longevity is a rare thing in any business. In the music industry, it’s practically unheard of. Continuing relevance requires a combination of vision and flexibility. A company needs to accommodate new trends while staying true to its original principles. Any outfit that can do that for a few years has something to brag about. If a business can keep its balance – and keep growing! – for two decades, that’s a remarkable accomplishment. Some might even call it legendary.

At HIP Video Promo, we don’t boast too often about what we’ve done. On the anniversary of our twentieth year in operation, we’re inclined to let the facts speak for themselves. We remain what we’ve always been: the undisputed leader in independent music video promotion, pledging our allegiance and dedication to nobody but the artists we serve. Since founding the company in 2000, we’ve promoted more than 3600 music videos by artists of all kinds. We’ve partnered with legendary artists like Pearl Jam, T-Pain, Armin van Buuren, Elvis Costello and Pixies. We’ve assisted the ascendancy of artists like Paramore, Maroon 5, Sia, M83, Nicky Romero, Justina Valentine, 30 Second To Mars, Luh Kel, and The Lumineers. We’ve earned the respect, and the business, of powerhouse labels like Sony and Universal, and we can call some of the hippest imprints on the planet – 4AD, Saddle Creek, Merge, Matador, Polyvinyl – repeat customers.

But we’re just as proud of the work we’ve done for hundreds of true oddballs and absolute independents: regional, unclassifiable artists whose voices deserve to be heard. Those who enlist the support of HIP Video Promo know we will apply the same sort of muscle – and the same sort of tireless advocacy – to their campaigns as we do when we’re out there sweating on behalf of Queens Of The Stone Age and Johnny Cash.

We’ve also done our part to expand the distribution environment for musicians of all kinds. Our reach is international: not only have we regularly placed clips on MTV, mtvU, BET Jams, REVOLT TV, Music Choice, and other familiar outlets, we’ve established productive relationships with programming outlets seen on Roku, Amazon Fire TV, Google Chromecast, and more. As viewing habits have evolved, so has our focus. When it comes to placing videos on the most prominent music websites and blogs, we easily outpace the competition. We’ve anticipated industry trends by offering comprehensive Spotify promotion and social media marketing alongside the services for which we’re best known.

How have we managed to keep this up for twenty years? Our success begins with our deep respect for the form itself. At HIP, we see the music video as the perfect synthesis of art and commerce. We believe that the music video is the single most important piece of marketing currency a musician has at his or her disposal – and that importance has only increased as audience attention has migrated online. At the same time, we recognize that the music video is a translation of the artist’s personal voice into a visual medium. We know that a good music video isn’t merely a commercial or a promotion: it’s a piece of the musician’s soul.

We’re able to talk about videos and explain their importance because we, too, are artists. HIP is staffed by musicians and filmmakers who are motivated by our love for songs and visuals, and by the joy we feel when we encounter the new and the exciting. In recent years, we’ve parlayed our experience promoting videos into making them. We’ve now made lyric clips and official music videos for dozens of clients, many of whom are members of the same New Jersey musical community that we proudly inhabit. HIP founder and president Andy Gesner has always been deeply embedded in Garden State music. He’s been a band member, an organizer, a show promoter, and a tireless champion of the underdog. In an industry that’s become sadly de-regionalized, we know where we come from, and we also know that those roots will keep us strong – and ready for the next twenty years, too.