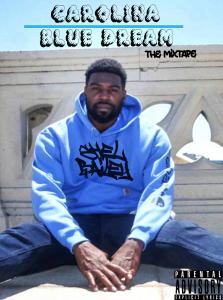 LOS ANGELES, CA, USA, November 30, 2020 /EINPresswire.com/ — Sheldon "Big Shel" Bailey is an actor/recording artist who's starred in Nickelodeon's "Game Shakers" and Showtime’s "Shameless. Shel Bailey has released his mixtape "Carolina Blue Dream". Shel Bailey explores his honest feelings towards his journey through music and headlines throughout the year that resonated with him. The upbeat and sometimes edgy cadence paired with Shel Bailey's compelling lyricism will take listeners on a journey, Shel's journey.

Carolina Blue Dream is hosted by video game sensation "ATM" from the gaming franchise "NBA 2k". Shel had the opportunity of portraying "ATM" in the franchise's recent installment of 2K21, the first on the new PS5 & XBOX series X. It adds a unique dynamic as Sheldon gets the chance to host the mixtape as an alter ego. The mixtape features Paper Chase, Roc C, Tha Rift, L.E.M, and a presidential special appearance. Shel is known for putting his heart into every track and "Carolina Blue Dream" is no different. The lead track "Quarantine Flow" is a response to his former college basketball coach, Gregg Marshall who was under fire for misconduct and forced to resign. Shel was at the media forefront of players pushing back against the career abusive coach. "Quarantine Flow" speaks to that, the NCAA, and other issues in the world on a great track produced by Cassius Clay(Rich the Kid).

For more on Shel's point of view on the NCAA and Gregg Marshall, click HERE

Shel Bailey, when speaking on his passion for the project shares, "I've been in the lab off and on for a while and it feels good to release some new music; music that I was able to take my time with. This is the first project in a while but it's leading the way for several projects in 2021. I didn't want to let this crazy year go without saying something on record."

Shel Bailey has had an illustrious career as an actor, recording artist and basketball player. He has had the ability to share his talents with the world. Shel Bailey has worked with high-profile sports stars on video projects, even performing as Lebron James' body double for over a decade including Space Jam 2. Shel will continue to showcase his talents to the world through every medium he can.

Shel Bailey, originally born in Germany was raised for most of his formidable years in North
Carolina, which his father hails from. Growing up as a kid in Fayetteville, North Carolina, Big Shel Bailey had dreams to play for the UNC Tarheels and one day be a multidimensional star like his childhood idol, Shaq. Shel became the number one player in NC before a traumatic knee injury would disrupt his basketball career. Feeling lost without basketball, Big Shel turned to the Arts for comfort. He found confidence through theatrical performance and excelled in drama. When he wasn’t performing, he would write down any lyrics he would think of. He cultivated his talent and pursued his dreams from home to SC, Miami, NY, and now resides in Los Angeles, CA. He is consistently working in Hollywood and show business while being the father to 3 amazing children. The successful Carolina to California connection is "Carolina Blue Dream".

For Press and Media Inquiries: