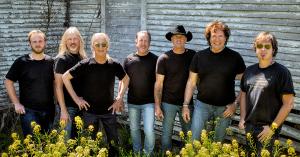 The Outlaws will bring their legendary performance style to Milford Connecticut in October for a concert at Veterans Memorial Auditorium.

For more than 40 years, The Outlaws have celebrated triumphs and endured tragedies to remain one of the most influential and best-loved bands of the genre. Back with new music, new focus, and an uncompromising mission, The Outlaws are a band of brothers bound together by history, harmony, and the road. They respect their own legacy while refusing to be defined by the past – including their own.

“Because The Outlaws had been out of the public eye for so long, it was almost like starting over,” original singer/songwriter and guitarist Henry Paul said of the band’s acclaimed 2012 comeback album It’s About Pride. “But because of the band’s history, we’re still seeing this as a new chapter. What our fans loved then is what they still love now, because we are just as good or even better than we were.”

Tickets are available now at ezEvent.com, with prices beginning as low as $40 and premium seats at the edge of the stage available for $55. Organizers are confident that the performance will run as planned with full capacity as concerts return from their long hiatus due to the coronavirus. Should a cancellation be necessary, full refunds would be granted.

Veterans Memorial Auditorium is an intimate venue at 70 West River Street, Milford, Connecticut with a capacity of 962 assigned seats. Originally part of the Milford High School, the auditorium has undergone a face-lift to become part of the Parsons Government Center and the home of performing arts in the city.

Doors for The Outlaws on October 2, 2021 at Milford’s Veterans Memorial Auditorium open at 7 p.m. with music scheduled to begin at 8 p.m. Tickets can be purchased now at www.MilfordVMA.com .