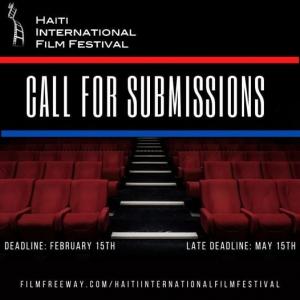 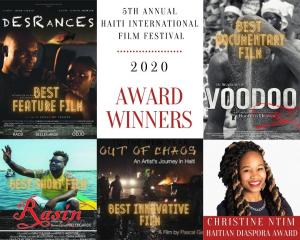 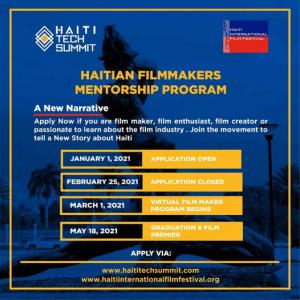 Haiti Tech Summit, founded by Forbes 30 Under 30 Entrepreneur Christine Souffrant Ntim, partnered with HIFF to launch the first Haitian Mentorship Filmmakers Program on Haitian Independence Day in 2021. Selected short films will be showcased on Haitian Flag Day in May.

"The COVID-19 pandemic was challenging and the film festival successfully pivoted to a two-day online event," said Constant. "If the COVID-19 curve flattens, we plan to return to our festival home at the Barnsdall Gallery Theatre, 4800 Hollywood Boulevard in Los Angeles, California. The core of our festival merges Hollywood with the Haitian culture and brings the stories that shape Haiti to a larger audience."

The theme for the short films is "What does Haitian Flag Day mean to you?" The selected short films will be showcased virtually on Haitian Flag Day on May 18, 2021 on the HIFF website. A major holiday in Haiti since 1803, Haitian Flag Day came to be when the revolutionary leader Jean-Jacques Dessalines ripped up the French tricolor flag. His goddaughter, Catherine Flon, used only the red and blue stripes from the French flag to stitch together Haiti's first independent flag.

"It is a dream to bring the Haitian Creative Community together through the Haiti International Film Festival, which has been illuminating the aspirations of Haitian Filmmakers since 2015," said Constant. "We are also developing a streaming platform for Haitian filmmakers to allow diverse audiences to experience Haitian films throughout the year."

Haiti Tech Summit, founded by Forbes 30 Under 30 Entrepreneur Christine Souffrant Ntim, partnered with HIFF to launch the first historic Haitian Filmmakers Mentorship Program on January 1, 2021 on Haitian Independence Day. Applicants can apply to the program at www.haititechsummit.com. The last day to submit an application is February 25, 2021. “The partnership combines two like-minded organizations that have a passion for changing the narrative and of Haiti through film and tech,” said Ntim.

The Haitian Filmmakers Mentorship Program is a month-long virtual experience throughout the Haitian Diaspora. Emerging filmmakers will have an opportunity to learn from Haitian established filmmakers to improve their careers. The mentees will produce a short film after the mentorship program concludes.

"The partnership with Ms. Ntim of Haiti Tech Summit on Haitian Independence Day was very significant for me," said Constant. "On January 1, 1804, Haiti made history by being the first Black Republic to gain its independence." Haiti celebrates every year on January 1, the same day as New Year's Day. Haiti Independence Day is an important holiday and the most important event in history as it marks Haiti's independence from the French colonial empire.

"We are proud to announce that the mentee's films will be showcased at the 6th Annual Haiti International Film Festival in Los Angeles and Haiti," said Constant. Since 2017, Haiti Tech Summit launched an inspiring 13-year initiative to change the future of the country via technology and innovation.

The 5th Annual HIFF Winners are:

To interview Jacquil Constant, filmmakers, actors or to request media credentials, contact Marie Y. Lemelle for Platinum Star Public Relations at 213-276-7827 at info@platinumstarpr.com with your request in the subject line.

HIFF is considered the HBO for Haitian films displaying the humanity of Haitian culture. The goal of the HIFF is to inform diverse audiences about the rich culture of the Haitian diaspora through innovative cinema. Through outreach and collaboration with emerging, and established filmmakers, we not only teach and conduct workshops, we build a stronger ecosystem for Haitian filmmakers through partnerships with non-profit organizations and educational institutions to make a bigger impact in Hollywood and Haiti.