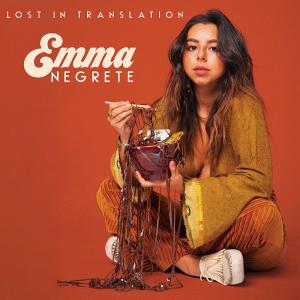 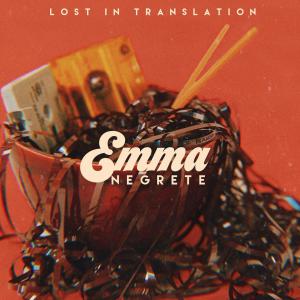 LOS ANGELES, CALIFORNIA, USA, January 22, 2021 /EINPresswire.com/ — We’re unfortunately conditioned to think of the singer/songwriter in certain terms. There’s usually an acoustic guitar involved. More strum than beat. The endeavor of packing more syllables than are available into a couplet. And so on. But, as reported today by our friends at AMERICAN SONGWRITER, LA-based upstart Emma Negrete is a whole other story. The publication shares the artist’s video for “Lost In Translation,” a track packed with so much truly good stuff that its function is much less ‘just another tune’ and much more a reveal of the inevitability of its singer/songwriter to become a real force in popular music.

In a world ever-primed for battle, the first few strains of “Lost In Translation'' find Negrete already self-possessed enough to know that there’s inherent strength in vulnerability. She’s even self-effacing, singing “I’ve become a coffee shop regular…”. But then, in a world of f-you salvos and restless anger, she gives us something we’re not used to– acceptance: “You are gonna feel how you are gonna feel/I will always feel how I will always feel.” For that, the song is a tearjerker, because it reminds us that, at some point, we’re going to have to give up and move on. That’s the painful part, and Negrete sings it like she’s lived it…

“God is always wrong in the Devil’s eyes/So, it’s safe to say that we were both right.”

One of L.A.’s best kept secrets, via Chicago and the comfy Midwest hub of Des Moines, Negrete started performing when she was 7 years old, spending many subsequent years participating in many choirs and ensembles with a wide variety of genres. She studied opera during high school and went on to study vocal performance in the jazz conservatory at the Chicago College of Performing Arts.
She performed in many venues around Chicago with her band, which inspired her to pursue music full time and move to Los Angeles, California. Negrete, pioneer of soulful pop, incredibly powerful voice immensely influenced by the likes of Stevie Wonder, Ella Fitzgerald, Stevie Nicks, Beyonce and Lauryn Hill. Indeed, Negrete has an economical style and a talent for note bending that is truly unique and I do believe not a single wasted note among the mere six songs appearing on her forthcoming debut EP on Business Records “Breaking Down the Algorithm”, dropping February 12, 2021.

Negrete’s stinging, emotional leads are highlighted throughout atmospheric straight-up Soulful Pop pieces “Lost In Translation“, “Strawberry Moon” and “Magma”. Negrete’s voice catches fire on “Living in the Post” and “Absent", this EP is 110% Emma Negrete, In full blow-them-away mode, Soultastic! Tasteful and timeless surprises for all music lovers. Emma Negrete, a soulful singer who is not adverse to pop or rock, sings with hardly any divisions, blues, soul, jazz and rock together in one melting pot of pop culture and bonded by the new, loud sound of millennial music… every phrase is a statement.
Emma’s traveled a lot of hard roads, even spending a year abroad in China, where she was greatly humbled and forced to face her darkest truths in a world of isolation… the real quarantine. Through her music she expresses her moments of clarity and the process of gaining back the control of her own mind. Now with her debut single “Lost In Translation” and EP “Breaking Down the Algorithm”, Negrete is at her best filling the world with timeless repertoire, well composed and relatable soon to be classic songs, not to mention a hefty injection of Worldy-Soulful Pop !

Negrete often writes about the people, observations, self-realizations, culture, and struggles she experienced while living overseas, hence, “Lost In Translation.” In her own words “I write at my best when I am very passionate about particular philosophies that stem from self realizations and a change in perspective. I find that if I have purposeful lyrics first, everything else will fall into place”.

Negrete’s biggest mission in the world is to share that changing your entire mindset for the better does exist and for people to feel the same amount of selfless love for themselves that she has found. It doesn’t come naturally for most people, it’s a muscle you have to exercise every day.
Emma Negrete “Lost In Translation” and the EP “Breaking Down the Algorithm” will be available on Cassette, CD, Vinyl, Digital and all Streaming platforms.
https://linktr.ee/Emmanegrete