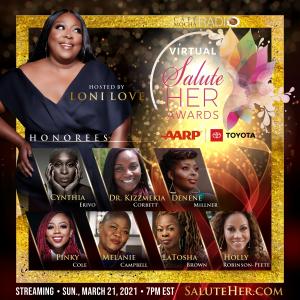 In Celebration of International Women's Day, 'Saluting Our Culture' Award series kicks off with women' creating a legacy' for their resilience and innovation

WASHINGTON, DC, USA, March 8, 2021 /EINPresswire.com/ — In celebration of International Women's History Day, Café Mocha Radio, the #1 nationally syndicated radio show for 'women of color,' announces its virtual Salute Her Awards, streaming Sunday, March 21 at 7 pm ET. Hosted by Emmy Award winner and Café Mocha co-host Loni Love, this year's 'creating a legacy' theme recognizes women who exemplify resilience and innovation with a commitment to building a legacy of connections for the next generation.

Presented by Toyota Motor North America and AARP, the Salute Her Awards is the first in Café Mocha's “Saluting Our Culture” award series with upcoming ceremonies in June and September honoring the phenomenal impact and contributions of African Americans globally.

2021 Salute Her Honorees Include:

The Toyota Champion Award will be presented to actress Holly Robinson-Peete for her tireless work with the HollyRod Foundation co-founded with her husband, retired NFL quarterback Rodney Peete. The foundation provides "medical, physical, and emotional support" to individuals living with Parkinson's disease and families of children with autism. The HollyRod4kids initiative assists families affected by autism by providing resources to improve the lives of children diagnosed with the disorder. Recently diagnosed with Autism at 31, Morgan Harper Nichols, acclaimed artist and poet will perform special tribute during the ceremony.

The virtual event will feature musical tributes from 4x Grammy-nominated singer/songwriter Eric Benet, 2x Grammy Award-winning singer and 2014 Salute Her Award recipient Gloria Gaynor, and 2020 Salute THEM Award recipient, multiple Grammy and Stellar Award-winning "Rose of Gospel Music" Dr. Dorinda Clark Cole. The evening will pay respect to the life of Cicely Tyson who left an indelible mark and legacy within the world of TV & Film.

“Toyota is proud to wrap this extraordinary year for the Salute Her Awards Tour by awarding Holly Robinson Peete and the HollyRod Foundation – the final Toyota Champion Award,” said Alva Adams-Mason, Group Manager Multicultural Business Strategy, and Dealer Relations for Toyota Motor North America. “The brand honors the selfless work of the HollyRod Foundation and their commitment in offering compassionate care to individuals and families living with autism and Parkinson's disease.”

AARP has once again partnered with the Salute Her Awards to exemplify their commitment to profile the work of today's women and their impact on the next generation. They are proud to "Celebrate Black Joy" for its beauty, brilliance, variety, tenacity, and resilience.

Proceeds from the Salute Her Awards benefit the Mocha Cares Foundation to support housing and services to combat homelessness and domestic violence through mentorship programs.

The awards will stream "live" via SaluteHER.com and across all the network's social media platforms @cafemocharadio. To register, visit www.SaluteHer.com.

About Toyota
Toyota (NYSE:TM), creator of the Prius hybrid and the Mirai fuel cell vehicle, is committed to building vehicles for the way people live through our Toyota and Lexus brands. Over the past 60 years, we've built more than 40 million cars and trucks in North America, where we have 14 manufacturing plants, 15 including our joint venture in Alabama (10 in the U.S.), and directly employ more than 47,000 people (over 36,000 in the U.S.). Our 1,800 North American dealerships (nearly 1,500 in the U.S.) sold nearly 2.8 million cars and trucks (nearly 2.4 million in the U.S.) in 2019.

About AARP
AARP is the nation's largest nonprofit, nonpartisan organization dedicated to empowering people 50 and older to choose how they live as they age. With a nationwide presence and nearly 38 million members, AARP strengthens communities and advocates for what matters most to families: health security, financial stability, and personal fulfillment. AARP also produces the nation's largest circulation publications: AARP The Magazine and AARP Bulletin. To learn more, visit www.aarp.org or follow @AARP and @AARPadvocates on social media.