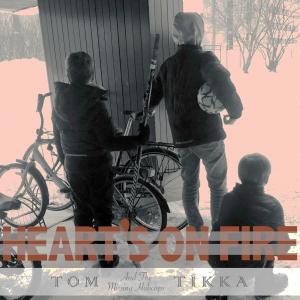 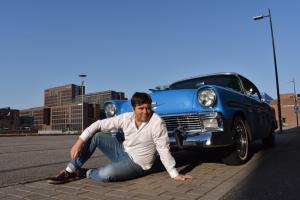 The prolific singer-songwriter and member of Finnish pop rock duo, The Impersonators, releases the first single from forthcoming solo full-length.

Just to set the record straight, I don't think I'm half the man my merchant-marine father was. If somebody were to tell me that I am just like him, I would consider it the highest possible compliment”
— Tom Tikka

HELSINKI, FINLAND, June 17, 2021 /EINPresswire.com/ — After a successful first full-length album release as one-half of Finnish pop-rock duo, The Impersonators, lead singer and songwriter, Tom Tikka is back with a brand new solo single. Released on June 18th, 2021, "Heart's On Fire" (MTS) is the first glimpse of Tom Tikka & The Missing Hubcaps' forthcoming album, "This Is My Happy Place." The youthful indie rock anthem was written by Tikka, following a conversation with an old friend.

Tikka explains, "Heart's On Fire" was a song I wrote after I had lunch with an old friend, last fall. After we had brought each other up to speed on what was going on in our lives, the conversation turned to our mutual friends and the inevitable gossip session began. I was in touch with some of the old gang he hadn't seen for years, and vice versa. I loved discovering what had become of our long lost, high-school friends.'

'It's actually quite interesting how each generation thinks they are going to be the first generation that's completely different from their parents. Yet, it seemed that most of us had, indeed, become exactly like our parents. There was one exception among us, my friend pointed out, someone who was still on the same path, doing exactly what he was doing in high school. I asked him who this person was. He looked at me and said, "Well, you. Your dad wanted you to become a lawyer or a business man, and here we are twenty-five years down the road, and you are still making records. As soon as I got home, I grabbed my guitar and wrote 'Heart's On Fire' in less than ten minutes."

He continues, "Just to set the record straight, I don't think I'm even half the man my merchant-marine father was. If somebody were to tell me that I am just like him, well…I would consider it the highest possible compliment."

Watch the video for "Heart's On Fire" at https://www.youtube.com/watch?v=6KRKh7mChqE

ABOUT TOM TIKKA: After Tikka's Sony-signed band, Carmen Gray disbanded in 2013, Tom Tikka formed The Impersonators with poet, Antti Autio. In 2017, The Impersonators signed with FBP Music Group, a German label based out of Frankfurt. Together with their producer Janne Saksa, The Impersonators have released tunes to rave reviews and a considerable amount of radio attention.

In 2020, Tikka began working with MTS Records and released a solo EP titled, "Working Class Voodoo" under the name Tom Tikka And The Missing Hubcaps. On this self-produced venture, Tikka played and sang everything himself. It featured the UK iTunes chart hit title single. On July 31, 2020, Tikka & The Hubcaps released the "Insane" EP on MTS Records. Following the global success of his Christmas classic, "Just Like Xmas (Love Is War)," Tikka released the "That's What Winston Churchill Said" EP including multiple Top 5 iTunes worldwide hits.