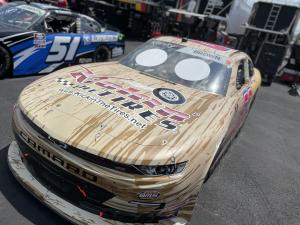 The Kickin’ the Tires.net logo is emblazoned on the hood of the No. 68 Brandonbilt Motorsports Chevrolet Camaro for the Xfinity Series Rackley Roofing 200 at Nashville Superspeedway.

KickinTheTires.net joins Brandbilt Motorsports as sponsor of the No. 68 Chevrolet Camaro for the NASCAR's Xfinity Series race at Nashville Superspeedway.

LEBANON, TENNESSEE, UNITED STATES, June 18, 2021 /EINPresswire.com/ — Brandonbilt Motorsports and motorsports media outlet Kickin’ the Tires.net, which is celebrating its 20th year covering NASCAR, have agreed to an ongoing partnership that will also feature the media outlet on the hood of the No. 68 Chevrolet Camaro in the NASCAR Xfinity Series Tennessee Lottery 250 this weekend at Nashville Superspeedway.

Following Brandon Brown’s sponsor pitch video going viral this past week on social media, the team was inundated with calls for potential partnerships but one of the first to reach out was Kickin’ the Tires. It didn’t take long before both sides knew this would be a great relationship.

“This weekend, I’m proud to welcome both Jerry Jordan and Kickin’ The Tires as well as Brandon Davis Music to our team for Saturday’s Tennessee Lottery 250,” said driver Brandon Brown. “Brandon Davis is a rising country singer-songwriter that has had some real breakout success over the last year. It’s really cool to be able to represent him and his music on our No. 68 this weekend and it’s going to be even more special to host Brandon and his family at the track for the race on Saturday.

Kickin’ The Tires is a multi-platform media company that is primarily focused on covering our great sport of NASCAR. They’ve been in the industry for almost 20 years and have always done an outstanding job of promoting the drivers, teams and their stories.

“It is an honor for Kickin’ the Tires to partner with Brandonbilt Motorsports for NASCAR’s return to Nashville Superspeedway,” said Jordan., who founded KTT in 2001. “And following the buzz from Brandon’s amazing creativity last week, how could we not join forces with them to celebrate our 20th year covering NASCAR?”

Brown has used social media engagement to not only garner some laughs but to also entice and interest sponsors to the sides of his competitive Xfinity team in 2021 and beyond.

With no easy routes toward success, Brown, 27, has become one of the brightest underdog stories in the Xfinity Series. Through just 14 races in 2021, Brown has already surpassed his career highs in top-five (two) and top-10 finishes (seven).

Entering the weekend 13th in Xfinity points, Nashville begins the team’s push to enter the series playoff run in just a few months’ time. If achieved, it will be the second consecutive playoff advancement in a row.

This positive attitude, mixed with his mutual core values of hard work and devotion, makes this partnership with KTT a natural.
“The values embraced by Brandonbilt Motorsports, Brandon Brown and his father Jerry Brown, align with the values I hold true and what Kickin’ the Tires stands for,” said Jordan. “When I first started covering NASCAR in 2001, it was because my mom and late-sister were huge fans of the sport and they got me into it.

“Brandon and his dad built their organization from the ground up with their own blood, sweat and tears as I was able to do with Kickin’ the Tires. There is no way possible that Kickin’ the Tires would be where it is today without the help of my wife and family and the dedicated writers and photographers we have on our staff. I am grateful to each and every one of them.”