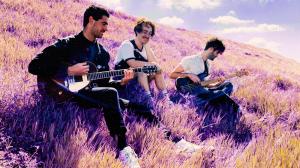 Bandmates Sam Adgate and Louis Petrella have been playing together since high school and their music expresses their Socal easy-going, good-time vibe.

Louis grew up jamming with his father and gained a fruitful education in classic rock music which he showcases in their productions. His extensive musical talents perfectly complement Sam’s captivating vocal ability and the two have gained some major attention since they first appeared on the music scene.

“Time Moves Slow” is the first song featuring Louis on lead vocals and he delivers a heartfelt and emotive performance. His raspy, slightly rock style vocals charm listeners and encourage them to join in with him when he sings: “time moves slow, when you don’t really want it to. Just know, I’ll be back soon as long as you stay near to me”.

This song has a happy and upbeat soundscape that inspires listeners to dance and skip around. But, the song is actually about heartbreak and how the loss of someone you love changes the world around you and makes everything, well… move slow.

The music video shows three sweet-natured, quirky young guys who could steal the heart of any young admirer. They project an image of wholesome, charming and adorable young men.

The opening scene of the video is reminiscent of The Beatles, as the boys stand with instruments in hand, nodding their heads from side to side.

Curious random images of blue skies, rollercoaster rides, Darth Vader, hula girls and gorillas flash across the backdrop. This accompanied by the bands geeky dancing is highly amusing and there is a definite tongue in cheek humour to the whole performance.

This fun music video and cheerful song will charm any music fan and if you like songs from artists such as Peach Pit and Green Day, then Sorry It’s Over will fit perfectly on your pop-rock playlist.

Listen to "Time Moves Slow" on Spotify and watch the music video below:

What’s Next for Sorry It’s Over?

The band are excited to announce they will be performing at The Viper Room, in West Hollywood on June 25th. This is their first live show since the pandemic and they hope to be coming to a town near you soon.