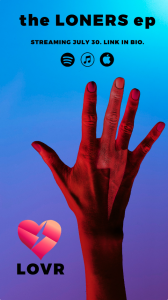 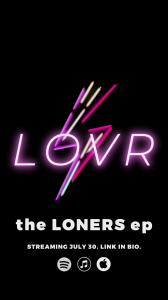 There was something insanely special about working on this EP with Noah. His talent, collaboration and the hauntingly poignant lyrics of love and loss in each of the songs we made are exceptional.”
— Johnny What

LOS ANGELES, CALIFORNIA, USA, July 30, 2021 /EINPresswire.com/ — Honoring the life, legacy, and music of Noah Benardout, The Noah Benardout Foundation announces the release of Noah’s definitive “LONERS EP” on the second anniversary of his passing. The five-song EP includes the title track “Loners” which was released on the first anniversary last year with the support of Coldplay who helped produce the Loners music video made by Impossible Brief.

Known as the artist LOVR, Noah Benardout co-wrote and produced the EP with producer Johnny What (Walk The Moon, Fitz and The Tantrums, The Glitch Mob, Elohim) in the spring of 2019, which was then mastered by seven time Grammy-winner John Greenham (Billie Eilish).

“There was something insanely special about working on this EP with Noah at the time. Just how important an experience is sadly too relevant today. Noah’s talent and collaboration was immense, and the hauntingly poignant lyrics of love and loss in each of the songs we made, are exceptional,” says producer Johnny What.

“I had the good fortune to meet Noah in person when he came to my studio” recalls John Greenham. “Apart from being a lovely person, one of the things that impressed me most about him was his dedication in pursuing his vision for the music. He knew exactly what he wanted down to the smallest detail. The five songs on the EP are very engaging and thoughtfully constructed. Noah was a special talent and it's a great loss that we won't be hearing any more music from him.”

“Noah and I had long discussions about his music, family and life”, added Lori Graf of LL Management. “He was an exceptional young man with a bright future ahead of him. I feel his music has the power to heal and unite people. I was hoping to manage his music career. Unfortunately, his life was cut short one day after our last meeting. His passing is a significant loss to me and to anyone who knew him. Rest In Peace, Noah.”

“With every day that passes, the gravitas of what was taken from our son is that much harder to accept. As agonizing as it is to hear Noah’s voice, we knew we had to release all his hard work,” expressed Marc Benardout. “Noah was so proud of the music he had created with Johnny and was excited to share it,” said his mother, Marie.

From the dreamy synths in “Never Know” to the catchy hook of “Cities”, the “Loners” EP is a quintessential emotional journey from an artist that loved deeply and that the world lost emphatically.

ABOUT THE NOAH BENARDOUT FOUNDATION
The Noah Benardout Foundation is a 501(c)3 organization that was established as a result of the tragic and sudden death of Noah on the night of August 1st, 2019 at the hands of a reckless drunk driver. The Foundation’s primary goal is to advocate immediate education and habit-forming skills for teen drivers to end the tragedies of Driving Under the Influence (DUI) which are 100% preventable. Over 300,000 people lose their lives each year in the US as a result of the careless and irresponsible actions of a driver under the influence; that’s one life lost every 49 minutes. The Foundation has partnered with The California Highway Patrol, Los Angeles Police Department, Mothers Against Drunk Driving, the California Office of Traffic and Safety and the National Highway Traffic Safety Administration.

ABOUT LOVR
Cut off in his prime, at just 24 years old and with his career in blossom, Noah was preparing to release his new music project under the artist name of LOVR®. For many years, Noah had honed his craft as a producer-writer-artist developing significant industry relationships, music collaborations and brand connections in preparation for the official launch of LOVR®. The world and industry unquestionably lost a pure talent.

The LONERS EP streaming on iTunes | Apple | Spotify and all digital platforms.