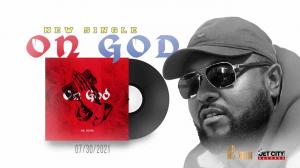 Taking charge of his Career, Mic North puts it all “On God” in his new single, slated to hit shelves on July 30th, 2021

WINNIPEG, MANITOBA, CANADA, July 30, 2021 /EINPresswire.com/ — The Most Hated rapper in Winnipeg Mic North marks his return to music and takes the world by the horns with the release of a new single, On God. The crisp vocals are mixed by the masterful Derek Benjamin, and the banging beat is produced by young EDM prodigy C.C.I.V. “On God” is a single off his upcoming project” Winnipeg’s Most Hated” hosted by the Legendary Dj Disspare. After surviving the lockdown, North bears himself for everything that is coming his way, Mic North truly puts everything “On God” and is true to his title.

Mic North’s skillful flow will assure listeners as he demonstrates the time that he has spent mastering the art of rapping, while his vocals inform listeners about standing tall and standing straight for what they believe in. The title “On God”, is no mere name, as Mic North does indeed put it all on god, and thanks God for where he is standing today.

Mic North takes inspiration from people all around him. From their work. From their lives. Connect with him on his socials on Instagram, Facebook, and Soundcloud; or simply just stream his music.

Mic North was born in 1988 in Winnipeg, MB, Canada. His musical style is shaped by his upbringing. Growing up in the inner city, Mic had to overcome adversity time and time again.​His teenage years were plagued with misguidance and being the only son in a fatherless home led Mic to look for camaraderie elsewhere. Before long, Mic found himself involved with street violence. After his incarceration in 2010, Mic decided he had to change his life for his newborn son and himself. Mic started recording music and got signed to a local record label in 2011. Mic has worked with such talents as Peter Jackson, Young Noble, Twisted Insane, Goody Grace, Winnipeg Most, and more. He has done successful openings for Paul Wall, Lil Scrappy, Freddy Gibbs, Stitches, Riff Raff, and more. Since then Mic North has started his own label and named it Jet City Records. Mic has also chosen to use his music and videography skills to help youth express themselves through digital media production. In 2016, Mic founded Motivation Art Programs (MAP’s) for youth across Canada, Mic hopes to make a big impact on troubled youth. Follow Mic’s journey through the music industry and life as a full-time musician and a father