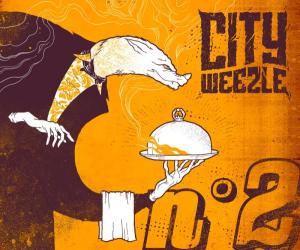 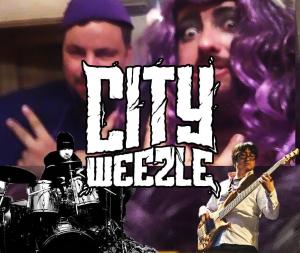 ASHEVILLE, NC, USA, August 2, 2021 /EINPresswire.com/ — City Weezle is a rock fusion band that fuses elements of different styles and influences, but marks its distinctly unique brand of fusion with a punky swing rock, groove backbone at its core. The band’s self proclaimed influences are Faith No More, Mr. Bungle, Primus, King Crimson, The Melvins, Frank Zappa…

“No.2” is City Weezle’s latest offering after a long Hiatus taken due to disbanding in 2010. It’s the fruit of years of work! The album was written and recorded in various beautiful and precarious places from the backwaters of Ireland to the metropoles of France and Japan over a 4 year period.

City Weezle was founded in Paris back in 2005 by potato lovin’ Irishman Simon Fleury. After stringing together two demos, “City Weezle” (in 2006) and “The Leprechaun” (in 2008), City Weezle became a prominent member of the European underground fusion scene. They toured Europe several times sharing the stage with acts such as Watcha, Sleepytime Gorilla Museum. They have also become good friends and collaborated with great underground acts such as Igorrr (who produced both the band’s LP’s), Vladimir Bozar, Pryapisme and Clurichaun. After the release of their first full length LP drummer Ai Uchida had to return to Japan.

Due to not being able to find anyone to replace him, City Weezle was put on hiatus indefinitely but released “Lysergik Tea Party” in 2012 to let people know the band would be back. In 2013 and the following years, Simon would meet pianist and composer CSL Parker, who mentored him in experimental free form improvisation. Under his advice, Simon would reform the band, reconnecting with drummer Ai Uchida and bassist Kengo Mochizuki. Ai flew from Japan to write and record the drums over a two week period In a little cottage in Ireland.

Over the following years, the instrumentation and vocals would be written and recorded in “various beautiful and precarious places” throughout Ireland, France and Japan, culminating in their latest effort and second LP entitled “No. 2”

The recordings include many Guests and the band’s musical palette diversifies on this album incorporating Piano, Organ, Harpsichord, String arrangements, etc. “No. 2” is a less chaotic sounding album stepping away from the Primus and Bungle influenced sound of Taboo opening up some new directions for the band who will strive to keep things original, fun and interesting for the listener to enjoy. The band is now promoting “No. 2” preparing for a post Covid return to the Stage.

Both City Weezle’s albums “Taboo” and “No.2” were co-produced with legendary breakcore artist “Igorrr.”

Here’s what the press has said about City Weezle:

“City Weezle has elements of Beefheart and Frank Zappa that make a welcome relief to singer-songwriter-dom and Guitar-band isms.” – Hot Press Magazine (Ireland)

“The Prog songs of this incredible band jump seamlessly through metal funk and an array of styles all while making it sound very natural.” – Longueur d’ondes (France)

“There are some Crimson notions in there and certainly the influence of Frank Zappa is present. There's this gigantic funky sound that seems to be present just about everywhere on this album.” – Dutch Prog Rock Page (Netherlands)

“They describe their sound as swinging, grooving rock with a sharp punky edge. All I know is with these 12 songs, the outcasts and forward thinkers will go bonkers over City Weezle. Brilliant!” – Eternal Terror (Norway)

“City Weezle have blended their influences into a surprisingly cohesive sound. The musicianship is excellent, and the songs are well crafted” – Progressive World (USA)

“The band is all over the musical map delving into hard rock, metal, funk, jazz, prog, opera, fusion and probably a few more genres that I missed. There is no denying the band displays exemplary musicianship and there is something about their quirky nature that is charming.” – Sea of Tranquility (USA)

“The pieces proposed are very enjoyable in addition to being well played and having a well-characterized choice of sounds, there is a certain care in the arrangements: odd tempos, well-executed cuts and a voice that seems to come directly from a madhouse criminal.” – Hard sounds.it (Italy)

Support the band by buying some of our cool merch here:
https://cityweezle.bigcartel.com/

Hear all our music and read all our lyrics for free here:
https://cityweezle.bandcamp.com/