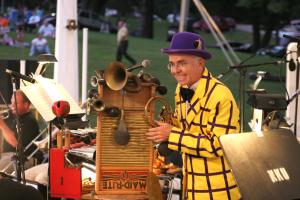 The KSO breaks out its authentic Spike Jones charts for a family-friendly evening of hit parodies and zany comedy from the 1940s and 50s.

The KSO accurately performs nostalgic music of various genres to preserve generations and eras of culture and history that makes the past come alive for audiences who have never heard such music.”
— KSO Music Director James Cassidy

NEWPORT, KY, UNITED STATES, August 3, 2021 /EINPresswire.com/ — The Kentucky Symphony Orchestra continues its 27th summer series in Devou and Tower Parks with an authentic re-creation of the music of Spike Jones in “Who Spiked the Symphony 3?” In the 1940s and 50s, percussionist Spike Jones and his City Slickers were heard on the radio, recordings, on tour, and eventually on their own television show. The cast were all great studio musicians and zany comics. No music escaped Spike’s parodies — pop, jazz, country and classical music.

In addition to Carl as Spike Jones, the KSO's own musicians and local cast have channeled the great City Slickers to recreate some of the bits, vocal effects, songs and band antics from the Spike Jones Shows (minus the many props). Joshua Steele and Schyler Vargas appear as the crooners and double as Homer and Jethro. Michael Bath takes a shot at Doodles Weaver's iconic race and circus calls, and Brooke Steele is featured in the Soap Operetta — "None But the Lonely Heart", while Steve Brun and David Haltermon handle the impressive vocal effects — glugs, hiccups, spitz, burps and yells. KSO musicians deftly carry the musical insanity to new heights.

The KSO is the only Symphony which authentically recreates Spike Jones’ original works live. In 2003, the KSO, with the help of Spike Jones Jr., KSO arranger Terry LaBolt and Carl Mack, reconstituted, from extant original manuscript, recordings and videos, a number of Spike Jones’ original hits and outrageous parodies including “Cocktails for Two,” “Pal-Yat-Chee,”and “Der Fuhrer’s Face.” (Full playlist attached.) These KSO performances are authorized by the Trust and Family of Spike Jones.

Join the Kentucky Symphony Orchestra Saturday at 7:30 p.m. — August 7, in Devou Park in Covington and Sunday at 7:30 p.m. — August 8, at Tower Park in Fort Thomas. Concessions are available in Covington as is the TANK Shuttle from Covington Catholic starting at 6 p.m.. Food trucks will be on-site in Ft. Thomas. Bring blankets, picnics or lawn chairs. For more information, registration (for weather updates) and directions, visit the KSO at www.kyso.org or call (859) 431-6216. $5 (per person) suggested donation. Free parking in both Devou and Tower Parks. Sunday’s 7:30 p.m. performance will be live-streamed. Go to kyso.org for the free link.