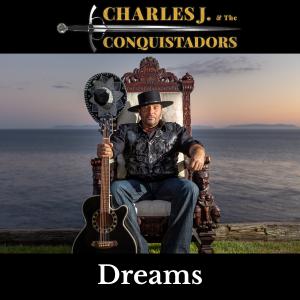 I am not here to play the Country music game but to recreate it.”
— Charles J. Jones

After seeing the widespread resurgence in popularity in 2020 of the song "Dreams" go viral, lead singer, songwriter and producer Charles J. Jones, who was a former major label Universal records/Rising Tide country music recording artist who previously went by the name J.C. Jones,  decided that although many people were singing and covering "Dreams", he felt that it was the perfect song to "reimagine" and create a brand new exciting arrangement and "sound" by using authentic Latin ranchera instruments such as horns, strings and a mexican Harp with Latin rhythm patterns mixed with a steel guitar. This has created and produced a whole new genre of music that is totally fresh and unique.

Produced by Charles J. Jones and Angel Duran, and engineered and mixed by Grammy nominated mixer Carmen Grillo, Charles decided to incorporate as his female duet partner the talented vocals of Latin mariachi vocalist Jasmine Lopez who previously was a member of the Grammy nominated all female mariachi group Mariachi Divas for 6 years. "Her voice and talent was so perfect for this song and she was able to incorporate and bring her own unique style to this iconic rock song", says Charles.

"Dreams" is the 1st release on their TruthAvenger titled album which is being released after the 1st of the year on the independent label Metamundo. Along with "Dreams", Charles J. & the Conquistadors have released "Crazy Heart", a country bolero style song which is sung in both in English and Spanish ala the "Before the Next Teardrop Falls" Freddy Fender classic. Included in their upcoming album, Charles J. & the Conquistadors have decided to create their own history by producing and recording the 1st ever English speaking "Country Ranchera" style song "ONE" (to be released in October) and also the 1st ever English speaking "Country Bachata" as well with "Leave the Lovin' To Me" and a Latin Country Bachata Duet version of the Rihanna power hit "We Found Love".

One song that will also soon be released within the next couple months is a Latin Country produced duet with the legendary Country music duo The Bellamy Brothers. Charles is currently discussing recording another Latin country produced duet with another very well known Multi-Platinum selling recording artist but has stated that he will keep it under wraps until it's a done deal and has expressed his excitement and is open to record with many recording artists in the future from all genres. As Charles states, "With this type of music and how we do the production and arrangements, all genres of music and songs we can 'reimagine' and make them new again and reintroduce them to a whole new generation of audiences. After all a hit is a hit. We do that with movies and super heroes all the time, they evolve in time as we "remake" them. Why can't we do that with some of our most all-time favorite songs like we did with 'Dreams'?"

As Charles declares in his bio, "I am not here to play the Country music game but to recreate it. I am creating a style of music that has never really been done before. Imagine being in the year 2021 and being so bold as to say that. This is NOT Tex-Mex or mariachi but an authentic fusion of styles." Charles knows he is on to something big because although he had this idea of combining country music with ranchera rhythms and the vision 20 years ago, the timing was just not there. Whereas with Spotify just recently launching the "CountryLatino" music category, this music exemplifies that category perfectly.